The second edition of "Panda a Pandino", the international gathering of Panda owners from all across Europe took place yesterday on 24th June. 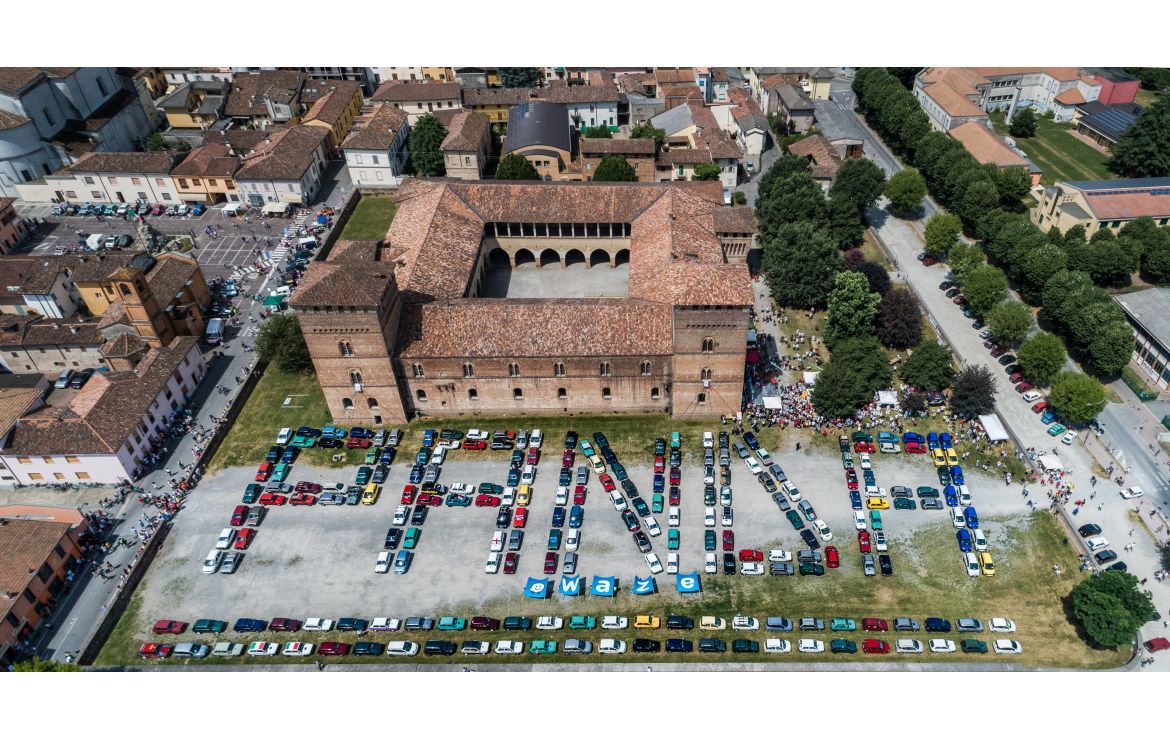 The second edition of "Panda a Pandino", the international gathering of Panda owners from all across Europe took place yesterday on 24th June. There was a Panda for every day, as 365 of them met up in Pandino, breaking all previous records and making it the biggest Panda gathering the world has ever seen.

Guest of honour at this second edition was the new Panda Waze, the most socially connected Panda ever. To honour the special guest, owners met up in front of Pandino Castle, the striking 14th century hunting residence of the Visconti family, where 200 Panda cars spelled out the words "Panda Waze", with the aid of colourful boards.  A lively procession then left the castle to parade 27km through several nearby towns and villages.

Some of the proud participants of the event were special enough to receive one of the 11 prizes offered by the organisers. Prizes were given out to the best equipped Panda, the oldest Panda in show, the Panda that came from furthest afield and the most extravagant Panda.  Proceeds from "Panda a Pandino 2018" will be used by Consulta dei Giovani, together with various associations and the City of Pandino to restructure recreational spaces for people with disabilities.

The event originally started as little more than a joke in 2017 when a young Panda owner from the south of Italy announced on Facebook her intention to drive with her friends in their little car to the town in the north of the country of the same name, Pandino. Word of mouth and social media saw to the rest. On 18 June 2017, the official date of the first edition, more than 200 past and present Fiat Panda cars turned up from all over Italy.

The Fiat Panda model's mission was always to make the smartest solutions, which simplify and improve life at the wheel, affordable for all. Fiat Panda has always set records in its segment with it being the first city car with 4WD (1983), the Panda was also the first car in its segment to win the coveted "Car of the Year" title (2004), and in the same year, it was also the first city car to climb to an altitude of 5,200m to reach the Everest base camp. This long series of records continued in 2006 when Fiat Panda became the first natural gas fuelled city car to be mass produced. In 2013 it was the first car in its class to introduce an "autonomous city braking" function. Even today, it is the first city car to proudly display the Waze name and integrate the functions of the app into its infotainment system, making it the most socially connected Panda ever.

The success of Fiat Panda is extraordinary in itself, over 7.5 million have been made since it was first launched.  Since 1980, it has clocked up an impressive list of achievements and commercial success, which together with Fiat 500 has been Europe's best-selling city car since 2003. This shows no sign of waning, as in the first four months of 2018 the Panda and Fiat 500 held a combined market share of 29.1%.