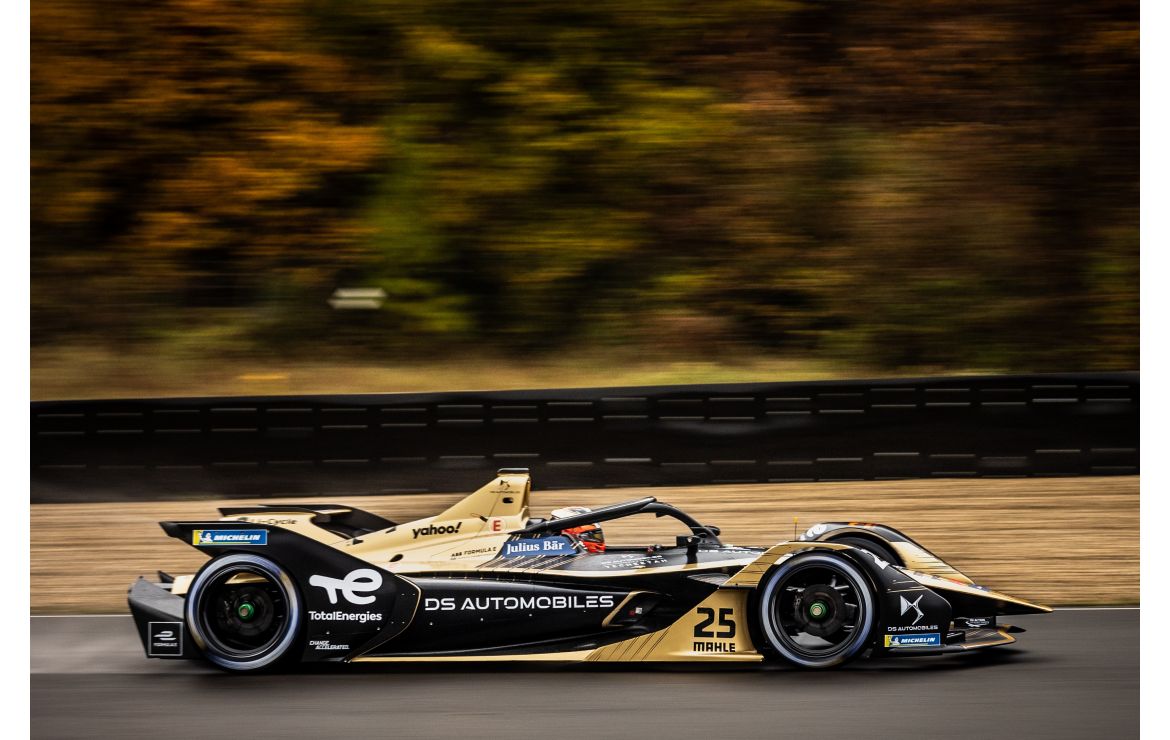 The famous DS E-TENSE FE21 run by the DS TECHEETAH team on the ABB FIA Formula E World Championship revealed its latest design for Season 8 on Thursday 25 November, during a shakedown on the Alès circuit in France.

The new black and gold livery, penned by the DS Automobiles DS DESIGN STUDIO PARIS, was presented by Frenchman Jean-Eric Vergne – the winner of two drivers’ titles in 2018 and 2019 – as well as by 2020 champion António Félix da Costa from Portugal, who both stay on as official factory drivers.

Following two double titles (for drivers and teams) in the 2018/2019 and 2019/2020 ABB FIA Formula E seasons, DS Automobiles and TECHEETAH are delighted to continue their partnership in Season 8 with a new structure. Mark Preston becomes Managing Director of TECHEETAH while Thomas Chevaucher, Director of DS Performance, takes on the role of Team Principal.

“This new organisation doesn’t in any way affect our principal goal of winning more titles. Thanks to this fresh structure, we’ll be more focussed than ever on competition, which is what really counts for DS TECHEETAH and DS Automobiles!”

“Motorsport is about more than just the technical aspects. In order to create a lasting future for TECHEETAH, I believe that it’s the right moment for me to concentrate my efforts on the future growth of the team and that of Formula E.”

“The involvement of DS Automobiles in Formula E is a major part of our electrification strategy, which will lead us to produce only 100 per cent electric vehicles from 2024. The qualities of the men and women at DS Performance have been demonstrated by the conquest of two double titles in two consecutive years, as well as by a record of nine wins with our second-generation cars, which no other constructor has managed. We use Formula E as a permanent laboratory to bring expertise and know-how to our E-TENSE models for the road, and we want to continue being part of the development of this 100 per cent electric championship to reinforce the reputation of DS Automobiles on every continent.”

“This is always a really exciting time of year! We’ve worked very hard with all the engineers, mechanics and entire team to give ourselves the best chance of winning races and claiming more titles! The new livery looks fantastic and I can’t wait to get back to racing with this team that I’ve been with for three years now and feels like a family to me!”

“I’m absolutely delighted to be starting another season with the team. We’ve been doing a lot of work for several months and everyone is extremely motivated by the goal of taking up where we left off as leaders next year. I’m looking forward to some great competition, and we’ll be doing everything to ensure that this becomes our best season in Formula E!”

Following the team launch, the DS TECHEETAH squad will head to the official pre-season tests in Valencia (Spain) from 29 November to 2 December, 2021. The cars will then be sent to Diriyah (Saudi Arabia) for the first race of Season 8, which will take place on 28 January, 2022.

Since starting Formula E in Season 2, DS Automobiles has racked up:

DS TECHEETAH Formula-E team is a Chinese racing team in the all-electric street racing series, ABB FIA Formula E. The team is owned by SECA (Shanghai) Limited. 2018/19 season saw DS TECHEETAH secure both the Drivers’ Championship with Jean-Éric Vergne and the Teams’ Championship in the first year of our partnership with DS Automobiles.

In the 2019/2020 season, DS TECHEETAH claimed its second back-to-back Teams' and Drivers’ Championship titles, this time with Antonio Félix Da Costa at the helm.

TECHEETAH holds the record of most Driver back-to-back wins with Jean-Éric Vergne and Antonio Felix Da Costa securing the Driver titles in 2018, 2019 and 2020.

China Media Capital ("CMC"), founded and chaired by Ruigang Li, is one of the most prestigious names in media and entertainment investment and operation in China and global markets. CMC has created and grown a number of champions and emerging leaders in the sectors of media and entertainment, internet and mobile, and lifestyle, covering film, television, music, sports, location-based entertainment, financial media, financial data service, online-video, smart TV, advertising, social network, game, online-education, e-commerce, O2O and etc.

Driven by the spirit of the avant-garde and backed by an exceptional heritage - that of the 1955 DS, the DS brand, born in 2014, aims to embody French luxury savoir-faire in the automotive industry.

Designed for a customer base looking for personal expression and eager for new technologies, DS models combine refinement and technology. With DS 3 CROSSBACK, DS 4, DS 7 CROSSBACK and DS 9, DS brand is launching a global range.

For its discerning customers, DS Automobiles has created "ONLY YOU, a wealth of attentions", its exclusive service programme for a unique brand experience.

With a presence in 41 countries, the DS brand has created and is developing an exclusive distribution network that includes 400 DS STORES throughout the world.