Wes Anderson’s new film – ‘THE FRENCH DISPATCH’, brings to life a collection of stories from the last issue of an American magazine published in a fictional 20th-century French town. An artistic collaboration with Citroën sees the historic Traction and Type H in leading roles throughout the film. Other Citroën models are also featured in the streets of the typically French town. 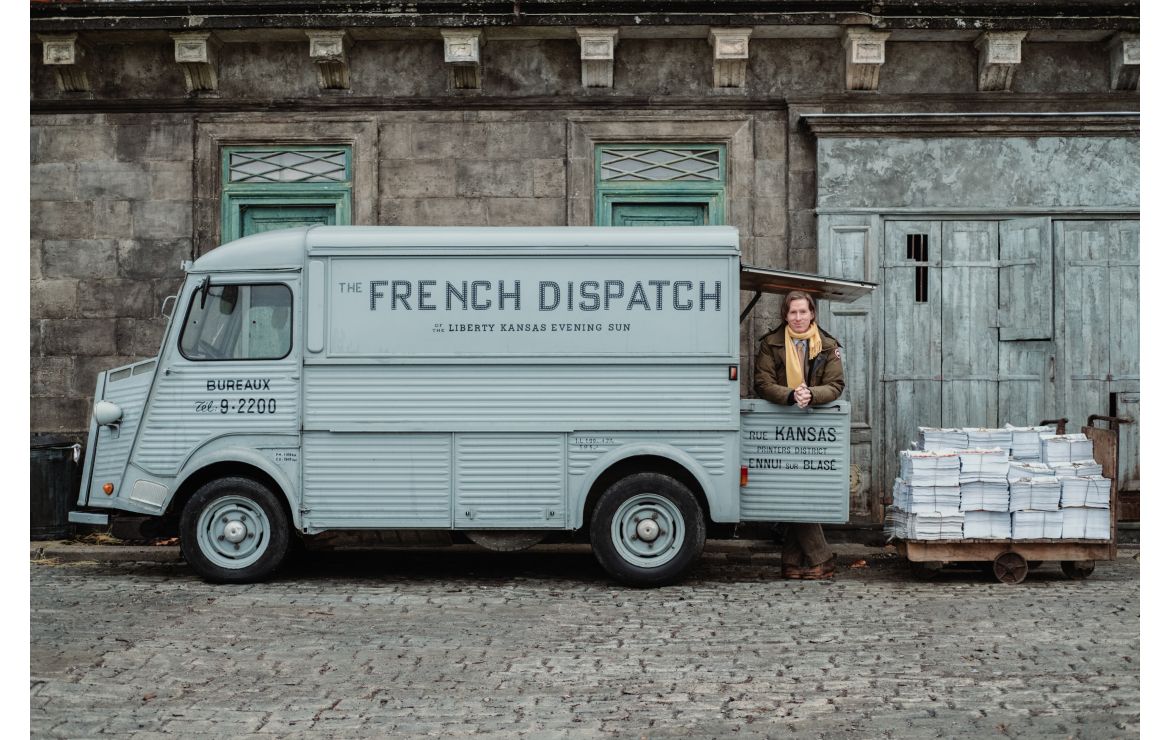 THE FRENCH DISPATCH, the new film from Oscar nominee and visionary filmmaker Wes Anderson, brings to life a collection of stories from the last issue of an American magazine of the same name published in a fictional 20th-century French town. The storyline unfolds in the imaginary town of Ennui-sur-Blasé, evocative of France through the years.

Wes Anderson, Director of ‘The French Dispatch’ commented; “The visual base of the film, the costumes, the sets, everything… it’s all informed by research. Even though it’s a kind of confection and it’s sort of invented stuff with a fantasy element to it, it is basically all grounded by reference.”

An artistic collaboration with Citroën is clear throughout the film. Visiting the Citroën Conservatoire before filming began helped to identify which models would best suit the story, mainly with Traction and Type H. Other iconic Citroën models are also featured on the streets of the typically French town: 2 CV, Ami 6, DS and GS.

ANIMATED CAR CHASE IN A TRACTION

Following the death of the editor of The French Dispatch, a widely distributed American magazine based in the French town of Ennui-sur-Blasé, the team of writers all gather to write his obituary. Memories of the beloved boss flow into four stories making up the film, including “The Private Dining Room of the Police Commissioner”. This part of the film carries overtones of French crime dramas from the 30s, 40s and 50s. At a crucial moment, the real-life images are replaced with an animation reminiscent of French comic books and the town where it was shot, Angoulême, known as the Cartoon Capital of France. The car chase takes place in the symbolic car of that period: the Traction!

A popular brand for more than a century, Citroën has always had a presence in cinema, with many of the brands historic  vehicles starring in many a famous scene. A few iconic examples that have featured in worldwide blockbusters include the 2 CV in James Bond film ‘For Your Eyes Only’ in 1981. Other examples include the DS from Back to the Future Part II (1989), and the animated film Cars 2 (2011) where DS and 2 CV are reunited and kiss above the Seine!

This is not the first time Wes Anderson has featured Citroën vehicles in one of his films, in ‘The Life Aquatic with Steve Zissou’ (2004), Wes Anderson pays homage to Citroën twice: when Professor Zissou’s crew goes to rescue hostages at the Hotel Citroën and when driving around their island base in a Yellow Méhari.

Since 1919, Citroën has created automobiles, technologies and mobility solutions to respond to evolutions in society. Being an audacious and innovative brand, Citroën places serenity and well-being at the heart of its customer experience, and offers a wide range of models, from the unique Ami, an electric mobility object designed for the city, to sedans, SUVs and commercial vehicles, most of them available with electric or plug-in hybrid powertrains. A pioneer brand in services and the attention paid to its individual and professional customers, Citroën is present in 101 countries with a network of 6200 sales and service points around the world. Citroën UK media website: https://uk-media.citroen.com/ – @CitroenUK