Citroën confirms its worldwide offensive in the SUV segment with the presentation of two new models at the 2017 Shanghai Motor Show. C5 Aircross makes its global debut, alongside the C-Aircross Concept that previews the brand’s future compact SUV: C3 Aircross. These two new models represent a new generation of Citroën SUV focused on comfort. The Citroën brand also expresses its expertise in the sedan segment, which remains a key category in China. New C5, produced and marketed in China, has received a design and technology update for extra occupant well-being. The advanced CXPERIENCE Concept also makes its first appearance in China. This concept car features all the elements of the Citroën Advanced Comfort® programme and previews future large Citroën models. 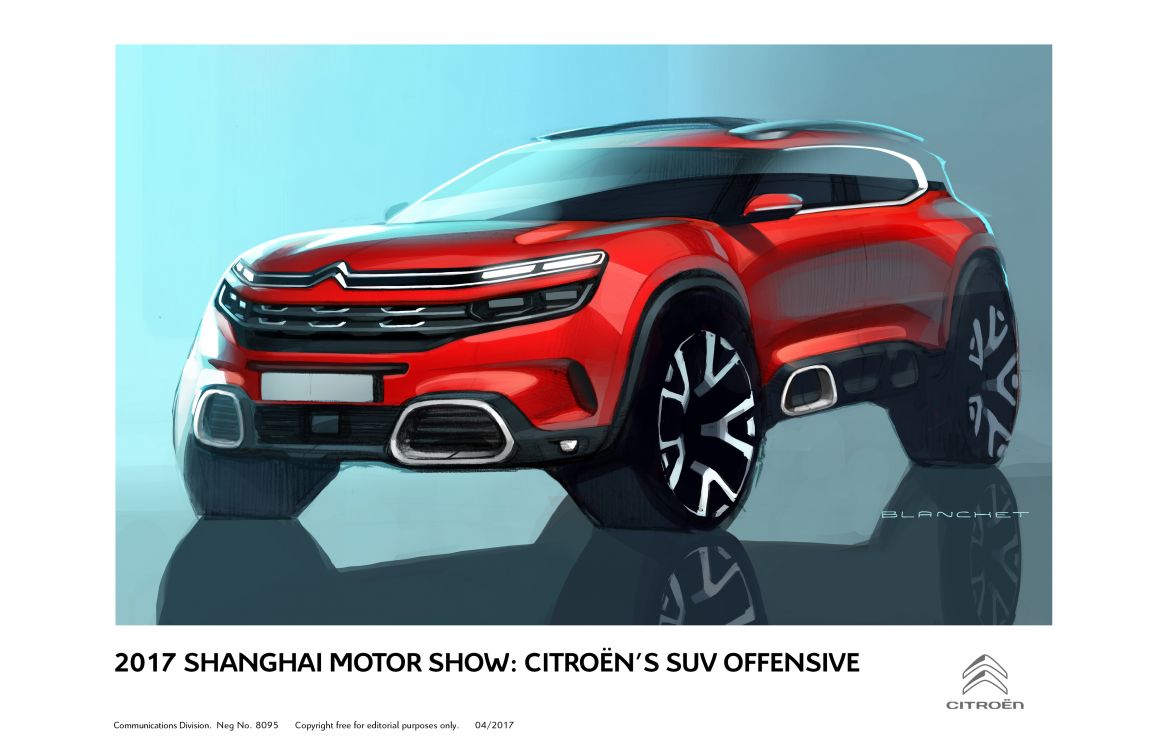 China is a key market for Citroën. The brand sold more than 250,000 cars in the country in 2016, accounting for roughly one in five Citroën sales worldwide. Dongfeng Citroën is expanding its range with the world premiere of the New C5 Aircross SUV. Set for launch in China in the second half of 2017, this new model will subsequently see production and its commercial launch in Europe at the end of 2018.

Alongside New C5 Aircross, the brand will showcase the C-Aircross Concept which previews Citroën's future compact SUV. Citroën can announce today that the production version will be called C3 Aircross. New C3 Aircross will be launched in Europe before the end of 2017.

In China, these two new models will sit alongside the Citroën C3-XR, an SUV with an assertive personality and Dongfeng Citroën's second best-selling model in 2016, with nearly 150,000 units sold since launch in 2015.

Dongfeng Citroën also boasts a complete range of sedans, including New C6, launched late in 2016 and C-Elysée, which was recently restyled and updated. More than 300,000 C-Elysée models have been sold since launch.

Citroën is further strengthening its position in the sedan segment with the renewal of the C5 for China, which is a modern and prestigious model with benchmark comfort that is making its debut appearance on the motor show stand.

Visit the Dongfeng Citroën stand at the Shanghai Motor Show on 19 and 20 April (press days) and from 21 to 28 April (public days).

The following executives will be available for interview:

To arrange an interview, please contact John Handcock via john.handcock@citroen.com

01 - CITROËN'S OFFENSIVE IN THE SUV SEGMENT

Directly inspired by the Aircross concept car presented at the Shanghai Motor Show in 2015, New C5 Aircross is a ‘people-minded’ SUV combining assertive design with an interior dedicated to well-being for all passengers. The new model stands apart through its unique character, dynamism and presence. Remarkably spacious for all occupants, it harnesses the latest technology to give owners an easier and safer drive, and takes a modern and all-encompassing approach to comfort.

New C5 Aircross marks a major step forward in the Citroën Advanced Comfort® programme with the world debut of a suspension system equipped with Progressive Hydraulic Cushions™, which is unique to the Citroën brand. The technology will be illustrated on the stand with a demonstration showing how the system filters out road imperfections.

Unveiled at the Geneva Motor Show earlier this year, the C-Aircross Concept previews Citroën's future compact SUV, which is intended for worldwide sale. The concept car adopts the principles of the Citroën Advanced Comfort® programme. The production model will be launched in Europe at the end of 2017 with the name C3 Aircross.

C3-XR: A MAJOR SUCCESS IN CHINA

An instantly recognisable SUV, the C3-XR inspires an impression of robustness, elegance and vitality. A unique Citroën characteristic, comfort is central to this design of this successful model. The car boasts class-leading accommodation, a spacious and welcoming driver’s cockpit, and a suspension system worthy of the very best sedans. The C3-XR is also equipped with the latest innovations for easier use, with its technological equipment (including keyless entry and start, a reversing camera and Grip Control) and connectivity through Citroën's telematics services.

02 - CITROËN STRENGTHENS ITS POSITION IN THE SEDAN SEGMENT

Citroën is presenting New C5, a modern and expressive sedan designed for the most demanding Chinese customers. The new model features elegant and prestigious styling outside and inside, with an emphasis on modernity and comfort. It retains and reinforces the strong points of the previous C5.

The expressive and modern new front end is typically Citroën, with two-tier lights including LED daytime running lights. Underlined by chrome, they broaden the front end while highlighting the chevrons. The new car's expressive and modern gaze features full LED technology. At the back, the wide Matrix LED lights have a captivating look with four modules on each side, producing an original and immediately recognisable light signature.

The interior is as impressively modern as the exterior, representing a major leap forward in terms of perceived quality and technology. The dashboard houses a 12-inch digital instrument cluster with customisable settings, as well as an 8-inch touchscreen. The broad and tall central console reinforces the feeling of travelling aboard a high-end sedan. Comfort remains a C5 strong point with broad and welcoming seats, peerless suspension comfort and optimised acoustics for the well-being of all passengers. New C5 is also equipped with useful and reassuring driver assistance systems for complete peace-of-mind, including blind spot monitoring, lane-keeping assistance, a collision alert system and 360° Vision.

With its distinctive and extraordinary body styling, the CXPERIENCE Concept points to the future of large Citroën sedans. The concept car's posture exudes a strong presence. The body shapes are well balanced, and the short overhangs and long wheelbase underline the spacious interior.

The cabin of the CXPERIENCE Concept features premium materials, decorated in a shade synonymous with a fresh and optimistic mindset. The generous and inviting seats offer unrivalled comfort and support. The 19-inch screen is a highlight cabin feature. Functioning as the vehicle control centre, it removes unnecessary controls from the dashboard and reinforces the impression of width and space.

03 - A STAND REFLECTING THE BRAND'S TRANSFORMATION

A SHOW STAND THAT PREVIEWS THE NETWORK’S FUTURE IDENTITY

Citroën is in the midst of a global transformation, with a 360° brand experience strategy that puts the customer at the heart of its business. The whole ecosystem of the brand is included, covering products, dealers and services. This approach is showcased on the 850m2 stand, where the brand's values of optimism and well-being are reinterpreted through soft and warm materials. It brings visitors a relaxing and colourful experience.

‘La Maison Citroën’ at the entrance to the stand offers a visual and sensory experience, and previews new design concepts at Citroën dealerships. The colours and materials on display are presented as if in a fashion salon.

Regarding services, Dongfeng Citroën came top in the 2016 J.D. Power survey of service quality and customer satisfaction, making Citroën the only mainstream carmaker to figure in the top three in both categories for four years in a row.

FILMS AND PHOTOS AVAILABLE AT:

Citroën harnesses creative flair and technology to enhance well-being. Since 1919 Citroën has made a major contribution to putting cars within reach of the general public, providing practical and purposeful answers to the questions arising in each era. Citroën cars today place a premium on design, comfort and useful technology. With 10,000 customer contact points and presence in over 90 countries, Citroën sold 1.2 million vehicles worldwide in 2015. The brand has also amassed eight manufacturers’ titles in the WRC and three Manufacturers’ FIA World Championship titles from the 2014, 2015 and 2016 WTCC seasons.