The new Alfa Romeo 4C has lapped the legendary Nordschleife at the historic Nürburgring circuit in Germany in a record-breaking time of 8 minutes 04 seconds, the fastest time of cars with engines under 250 HP and in line with times set by sports cars with much higher prices and more powerful engines. 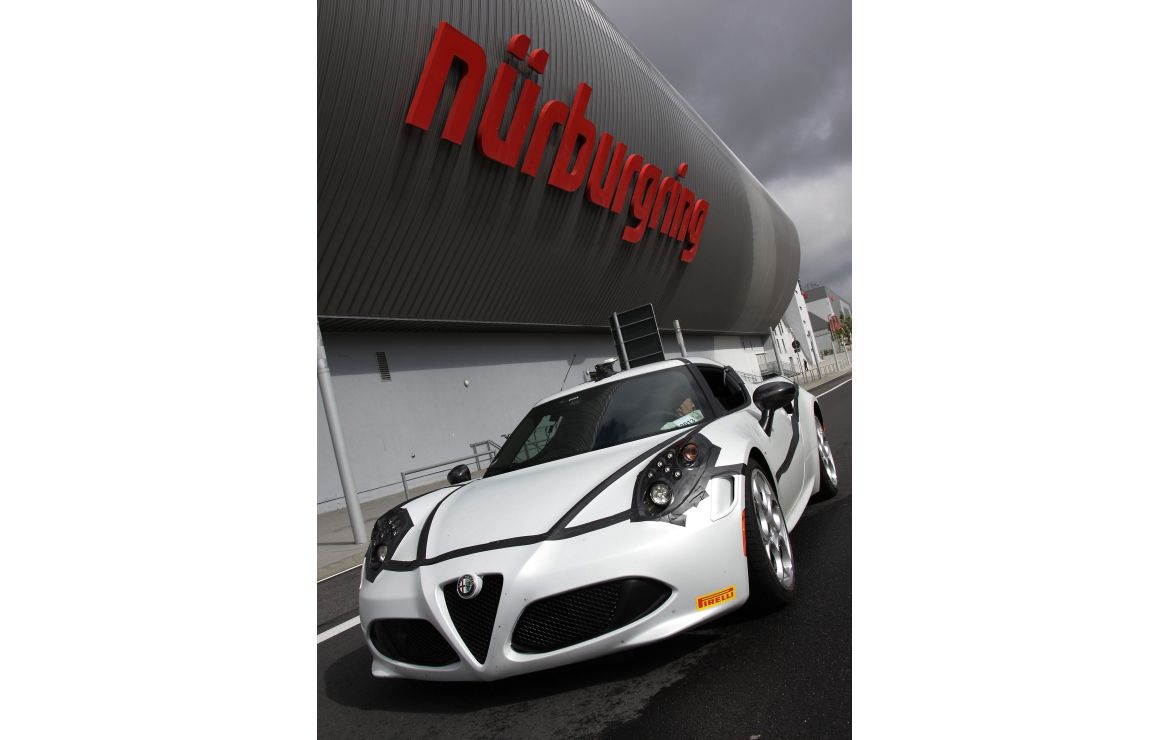 The new Alfa Romeo 4C has lapped the legendary Nordschleife at the historic Nürburgring circuit in Germany in a record-breaking time of 8 minutes 04 seconds, the fastest time of cars with engines under 250 HP and in line with times set by sports cars with much higher prices and more powerful engines. Driver, journalist and Nordschleife expert Horst von Saurma was behind the wheel when the record lap-time was set on September 12, 2013.

The test conducted at the 'Green Hell' in Germany is one of the countless tests that the Alfa Romeo supercar had to face in every part of the world, from the ‐35°in Sweden to the +40°of Abu Dhabi; from the Arizona (USA) deserts to the slopes of Mt. Etna in Sicily and from the Balocco test track in Italy track, where all Alfa Romeos have been developed, perfected and tested since 1962, to the one at the Nürburgring.

Used by car manufacturers the world over as a test and development track, the Nordschleife offers a unique configuration that alternates slow and fast curves, as well as straight stretches and undulations, to make it an outstanding testing ground for determining the soundness of a project.

In short, the 'Green Hell' proved to be the ideal place to put the performance features of the Alfa Romeo 4C to the test. This true, uncompromised driving machine delivers its best on the track, where speed, short braking distances and transverse acceleration are essential to get first‐rate lap times:  0 to 62mph in 4.5 seconds; 160mph of top speed; deceleration peaks in the range of 1.2 g; lateral acceleration peaks of over 1.1g and optimum weight distribution ‐40% over the front axle and 60% over the rear, not to mention a power-to-weight ratio of over 250hp per tonne, values worthy of true supercar.

In addition to its superb agility and phenomenal grip, credit must also be apportioned to the new 240hp 1750 Turbo Petrol engine, the latest‐generation 'ALFA TCT' dry twin clutch gearbox and the advanced Alfa D.N.A. selector with its newly-introduced "Race" mode. The new four-cylinder 1750 Turbo Petrol - with direct injection at 200 bar and an aluminium block - sets new records for torque and specific power for this size of engine, at over 200 Nm/litre (147.5 lb ft/litre) and 137hp/litre respectively, while maximum power of 240hp is reached at 6,000 rpm. The maximum torque of 350Nm (258 lb ft) ensures extraordinary elasticity and sportiness since it is maintained constant between 2,100 and 4,000 rpm with 80% of the torque already available from just 1,800 rpm.

Also contributing to the Alfa Romeo 4C's performance at the Nürburgring were the special Pirelli P Zero Trofeo tyres, the sportiest version in the Pirelli P Zero line. A record was set not only on the track, but also in the development of the tyres: It took less than one year of collaboration between Pirelli and Alfa Romeo engineers to develop of the best solution for guaranteeing grip and precision while driving of the Alfa Romeo 4C. These special 'AR' P Zero tyres, available in two sizes, 17" front and 18" rear or 18" front and 19" rear, ensure grip, performance, sportiness and precision. The 'AR Racing' tyres, offered only in 18" front and 19" rear sizes, have been developed not only with road driving in mind, but also for use on the track.