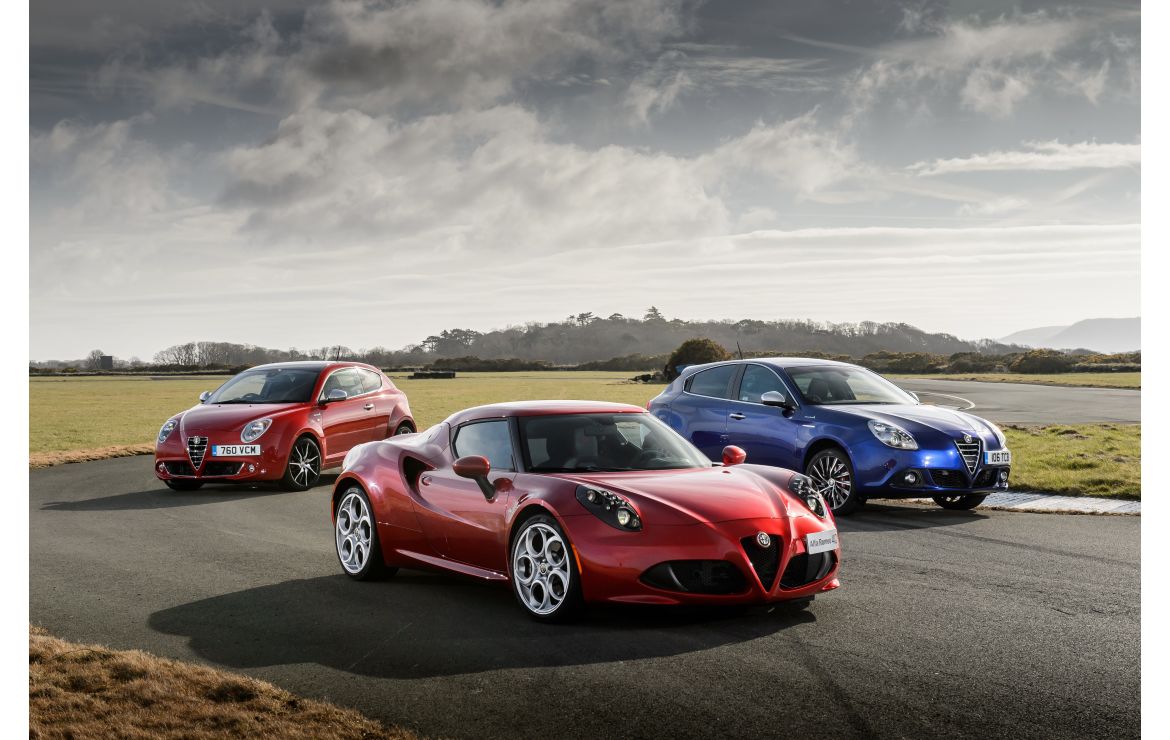 The 2014 Alfa Romeo MiTo has gone on sale in UK offering customers higher specification, revised interiors, subtle styling enhancements and even more advanced technologies, including the UconnectTM five-inch, colour, touch-screen infotainment system as standard equipment and the addition of the new 105hp TwinAir engine to the range.

A comprehensive array of traction, braking and stability control systems is standard on all Alfa Romeo MiTo models and these systems, along with steering effort and throttle response, can be adjusted via Alfa Romeo's trademark Alfa D.N.A. three-mode selectable driving mode system. Where fitted, Alfa SDC adaptive suspension and ALFA TCT transmission settings are also adjustable via the Alfa D.N.A. system.

A new 1.4 TB MultiAir 140hp, equipped with the ALFA TCT twin dry clutch transmission as standard, will join the line-up shortly - more details to be announced soon - while the diesel range consists of the 1.3 JTDM-2 85hp and 1.6 JTDM-2 120hp power plants.

The 2014 Alfa Romeo Giulietta is now on sale in the UK with renewed style, new engines and more technological content than ever before. Launched in the UK in 2010, the Alfa Romeo Giulietta remains the most eye-catching and attractive car and in its segment and, as a consequence, the styling revisions for 2014 have been carefully considered, with a new front grille design; revised front fog light bezels; new 16-, 17- and 18-inch alloy wheel designs and new exterior colours (Luna Pearl, Cobalto Blue and Metallo Bronze) to further enhance its appeal.

The interior of the Alfa Romeo Giulietta benefits from more extensive revisions: The standard UconnectTM multimedia system takes pride of place in the redesigned, high-quality dashboard, with the associated USB/Aux ports now relocated to a more convenient position in the centre console.

New door trim panels and a sporty new steering wheel design bring improved quality and more style to the cabin, while the redesigned seats not only exude Italian craftsmanship, they are also more comfortable and more enveloping - particularly in terms of upper-body lateral support - and are presented in a variety of new upholstery and leather finishes. Extensively revised sound insulation also provides a quieter and more relaxed driving environment.

Under the bonnet, every engine in the Alfa Romeo Giulietta range benefits from improved efficiency and lower emissions which doesn't just make the Alfa Romeo Giulietta more environmentally friendly, it also results in lower fuel bills and reduced Benefit-in-Kind costs for company car drivers. The 1.4 TB MultiAir 170hp ALFA TCT, for example, now drops into the 15% BIK band, while the diesel-powered 1.6 JTDM-2 105hp drops from the 17% BIK band down to the 15% band. The new 150hp 2.0 JTDM-2 engine, which debuts on the Alfa Romeo Giulietta, doesn't just offer more power and torque compared to the previous 140hp 2.0 JTDM-2 engine, it also produces 9g/km less in terms of CO2 emissions, dropping it into the 17% BIK band.

The heart of the new 2.0 JTDM-2 150hp engine is its third-generation Common Rail injection system that uses innovative injectors capable of controlling the amount of diesel injected into the combustion chamber with maximum precision and flexibility, thanks to its balanced hydraulic servo valve. Up to eight injections per stroke are possible together with injection strategies that optimise the combustion process. The Injection Rate Shaping (IRS) system, for example, involves two consecutive injections so close together in time it generates a continuous and modulated fuel supply into the cylinders. In this way the combustion process is improved with quieter operation with reduced particulate and nitrogen oxide (NOx) emissions, and because the injection system has 40% fewer components it also offers greater simplicity and reliability.

Regardless of engine choice, the Alfa Romeo Giulietta driver always has the option of customising their car's driving character using the standard Alfa D.N.A. driving selector, allowing them to find the ideal blend of comfort, performance, safety and efficiency for the prevailing conditions.

Built on Alfa Romeo's most advanced architecture with a sophisticated multi-link rear suspension, the 2014 Alfa Romeo Giulietta provides not only one of the most enjoyable driving experiences in its class, it's also one of the safest cars on the road. In addition to VDC, six airbags, three-point seat belts with double pre-tensioner, an anti-whiplash system and a third load line for excellent passenger compartment protection, the Alfa Romeo Giulietta is also fitted with the Alfa D.N.A. driving selector, Electronic Q2 differential, DST (which prompts drivers to apply the correct steering input in the event of an emergency through impulses at the wheel) and a Pre-Fill system which arms the brakes for emergency braking situations when it senses the drive may be losing control of the vehicle. As a further safety measure for 2014, a tyre pressure monitoring system, is also now standard across the Alfa Romeo Giulietta range.

The new Exclusive trim level takes the place of Veloce for 2014 and benefits from new 17-inch alloy wheels and new leather and micro-fibre upholstery, plus rain-sensing wipers; automatic headlights; electric-folding door mirrors; dark tinted windows; an electro-chromatic rear-view mirror; a rear arm-rest and electric front-seat lumbar support. In total, close to £2,000 worth of additional features are now standard while the price increase is just £920. Exclusive models are also equipped with a sports suspension; sports leather steering wheel with red stitching; aluminium sports pedals and kick-plates; darkened headlight clusters; satin-effect mirror covers and side body skirts. The Exclusive engine range is comprised of the 1.4 TB MultiAir 170hp (available as a six-speed manual or with the six-speed ALFA TCT transmission); the 1.6 JTDM-2 105hp and the new 2.0 JTDM-2 150hp.

The new Sportiva Nav trim level benefits from the standard features of the outgoing Sportiva model - its sports suspension; 18-inch alloy wheels in a dark titanium finish; red Brembo brake callipers with uprated discs and unique badging - but is now fitted with a sports steering wheel with white stitching; leather and Alcantara upholstery; front parking sensors and, as the name suggests, a new 6.5-inch UconnectTM satellite navigation system, with TMS, all as standard. The 2014 Sportiva Nav engine range is comprised of the 1.4 TB MultiAir 170hp (available as a manual or with the ALFA TCT transmission) and the new 2.0 JTDM-2 150hp engine, with prices increasing by just £810 despite more than £2,500 worth of additional equipment now being offered as standard.

Carbon-fibre was chosen for the one-piece monocoque due its high levels of structural rigidity and exceptionally low weight - just 65kg - and is built using sophisticated Formula 1-derived technologies, evolved especially for Alfa Romeo for series production of up to 1,000 units per year. SMC (Sheet Moulding Compound), which is lighter than both steel and aluminium, is used for the bodywork while even the thickness of the glass has been slimmed down by 15% to help reduce the Alfa Romeo 4C's overall weight.

Less than 4m in length and with a wheelbase of 2.38m, the Alfa Romeo 4C's compact shape accentuates its remarkable agility: With a dry weight of 895kg and a 40:60 front-to-rear weight distribution, the Alfa Romeo 4C is capable of generating 1.1g of lateral acceleration and in excess of 1.2g of deceleration force.

Power comes courtesy of a new four-cylinder turbo engine which, thanks to its aluminium block, is 22kg lighter than the engine that powers the Alfa Romeo Giulietta Quadrifoglio Verde. Turbo-charged and with direct injection, this new 1750 Turbo Petrol unit sets new torque and specific power records for this size of engine, at over 200Nm- and 137hp-per-litre respectively. Its maximum power output is 240hp at 6,000 rpm while its maximum torque output is 350Nm (258 lb ft), available between 2,100 and 4,000 rpm. To underline the flexible nature of this new engine, 80% of its torque is available from just 1,800 rpm.

Accelerating from 0 to 62mph takes just 4.5 seconds in the new Alfa Romeo 4C and top speed is 160mph, but this supercar performance isn't at the expense of the environment. Due to its light weight and advanced engine and transmission technologies, the emissions of the Alfa Romeo 4C fall well within the strict limits of Euro 6. Its official combined-cycle fuel economy figure is 41.5MPG and its CO2 emissions are just 157g/km.

Being an Alfa Romeo, the driving experience is more than just raw statistics. The exhaust has been tuned to emit a full, rich sound and particular attention paid to the seat design so the movement and reactions of the car can be 'felt' properly. The steering, unassisted, is progressive, direct and engineered to convey as much feedback and feel as possible. The steering ratio (16.2) is such as to allow 90% of bends to be taken without having take to your hands off the steering wheel. Both brake and throttle responsiveness have also been tuned to match with the dynamic nature of the Alfa Romeo 4C.

Inside the Alfa Romeo 4C, the exposed carbon-fibre chassis and driver-oriented controls leave you in no doubt as to the purposeful nature of the car. In place of traditional dials, a multi-function, digital display occupies the instrument binnacle and the steering wheel is a bespoke, flat-bottomed, two-spoke item with integrated paddle gear-shifters. The remaining controls are grouped together on the tunnel console, including the button-operated ALFA TCT transmission selector and the Alfa D.N.A. system selector, which alters the operational parameters of the engine, transmission, ESC and Electronic Q2 differential depending on the driver's requirements. Composite bucket seats and aluminium pedals complete the minimalistic, drive-focussed cabin.

About the Isle of Man

With an approximate area of just 221 square miles, and located in the Irish sea between England, Scotland, Ireland and Wales, the Isle of Man has a population of 84,000 and its capital is Douglas to the east. Interestingly, despite the Isle's location, it is not a member of the EU. Its economy is based around tourism, financial services, manufacturing and e-business.

The island has a total of 688 miles of public roads and in areas denoted by derestricted signs, there is no national speed limit. A mecca for motorcycle racing fans, the Isle of Man "Tourist Trophy" attracted 39,224 visitors in 2013 and entries for the 2014 TT are over-subscribed meaning only 200 entrants will be lucky enough to make the start line. The first motor race on the island took place in 1904 and was actually a car race: The Gordon Bennett Eliminating Trial, which was limited to touring automobiles. The first motorcycle race took place the following year: The 1905 International Motor-Cycle Cup Race.

The first TT race over the Snaefell Mountain Course took place in 1911, the year after Alfa Romeo was established, with the current 37 ¾ mile course established in 1920. The modern king of the TT Mountain Course is John McGuiness who currently holds four TT records including the outright 17m11.572s lap record at an average speed of 131.671mph. The most successful TT rider was Joey Dunlop who has 26 wins in various classes between 1977 and 2000, followed by John McGuiness who currently has 20 victories.

The Isle of Man's extensive coastline, stunning natural landscapes and unspoilt beaches make it a natural holiday destination for adventure-seekers. Water sports, mountain-biking and walking excursions are amongst the most popular active pursuits, while marine creatures such as seals, basking sharks and dolphins can often be spotted around the south of the Island and the huge population of birds that visit the Island each year visible in the north. The indigenous Manx cat is distinguished by a naturally-occurring mutation, which shortens its tail, and cats are classified according to the length of their tails, ranging from Rumpies and Stumpies, which have no tail or a partial tail, to Longies, which have a half- to
normal-length tail.