Last night witnessed the conclusion of the third exciting section, taking the convoy from Rome to Bologna. 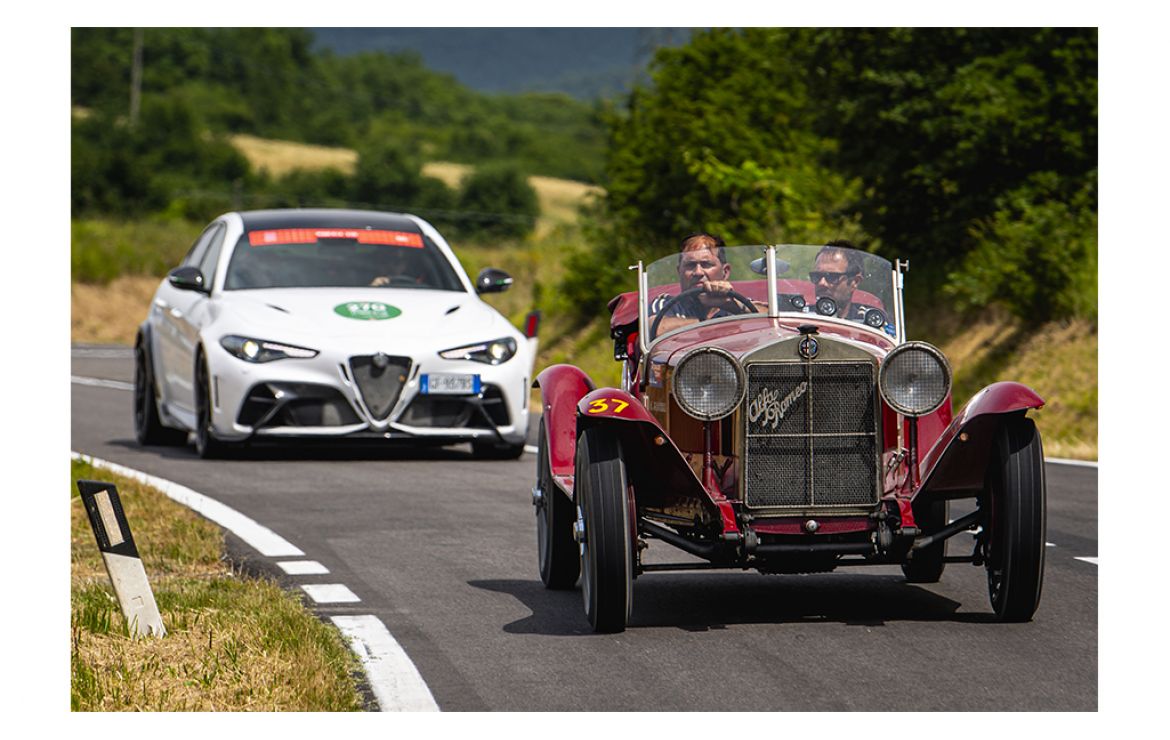 “We’ve completed the longest stage of this year’s 1000 Miglia, and we’ve received an incredibly warm welcome everywhere. Today though, we’d like to pay tribute to the work of the support team at the Heritage department, who very quickly restored the leverage of the clutch on our Alfa Romeo, which was put to the test by the descents between Umbria and Tuscany. That’s how we managed to cross the historic Futa and Raticosa Passes to arrive in Emilia-Romagna, the land of engines where a special feeling is always waiting in the wonderful way the public here likes to join in.”

The 1000 Miglia bade farewell to the Italian capital early this morning. There was no lack of warmth: summer is approaching, and the public’s warm welcome is almost tangible. One of the many minor miracles among the people that can be attributed to the “Freccia Rossa” (“Red Arrow”) is its exclusive ability to put a stop to morning traffic on the Grande Raccordo Anulare, Rome’s ring road. But such is the passion that motorists give themselves a break from their daily grind to admire the traveling museum and the convoy of current Alfa Romeo models as they pass. The standout among them is the Giulia GTAm in its Montreal Green livery, expected to unleash its 540 hp of power at the sound of the starting horn.

The highest aspiration of modern man in terms of cars

The Montreal Green livery is a tribute to the coupé unveiled in 1970, anticipated by a concept that caused a great hubbub a few years earlier. The Alfa Romeo Montreal has its very own unique history: it owes its name and conception to the invitation of the organizers of the 1967 universal exposition, the Expo held in Montreal, Canada. Alfa Romeo, the only automaker in attendance, was invited to the event to represent the world of automobiles as a synthesis of technological innovation and design. The prototype was displayed at the Canadian event, with the expectation of representing “the highest aspiration of modern man in terms of cars”. A big responsibility, a great honor for the Biscione brand and a concept that has long led the way for engineers and designers.

The green of the GTAm, the GTA’s Trophy White and the red of the 1000 Miglia: an embrace in the Italian flag

The farewell to Lazio was unforgettable: after the exciting, picturesque time trial in Baschi – the streets enticing the drivers to take every turn on the right foot – the convoy passed Orvieto Cathedral. In the shadow of this masterpiece of Gothic art, an affectionate embrace with the public and all the spontaneity and irresistible if toothless smiles of the children: schools have broken up for the summer vacation and the morning can be spent with the convoy, waving the flag for the 1000 Miglia.

From the Prato park to the city of Prato

The earliest prewar cars reached Arezzo at 1:30 pm, where lunch was taken in the Prato, a jewel nestled between the city's cathedral and Medici Fortress, and the oldest park in town. After the well-earned break, a time check took place in Piazza Grande. The group came back together, ready to face sector 9 ending in Prato, where the first car arrived just before 4 pm, after the time trial in Radda in Chianti. The drivers took to the road at dawn with hours packed with emotions still to go on the way to Bologna: the historic Futa and Raticosa passes remained to be crossed.

As the sun went down, up went the passion for Alfa Romeo

It was late, but there was no lack of an audience worthy of a Grand Prix on the roadside, anxiously and excitedly waiting to see so many cars. The spectators participate too, with a wave of their hands to sum up their desire to encourage the drivers and their feats. After driving for 15 hours, these feats cross over into heroism: the faces of the crews are drawn and sun-kissed, given that most of the cars are open-topped and the windshields of the others barely protect the drivers from the sun's rays. But the sun was going down by the time the route returned to the flat on the way to Piazza Maggiore: this timeless race ended just before midnight in the heart of medieval Bologna.