Alfa Romeo Racing ORLEN endured a challenging Saturday afternoon in Belgium, during a very wet qualifying session in Spa-Francorchamps. Antonio Giovinazzi was the first to miss out on a place in Q2, setting the 16th fastest time, while team-mate Kimi Räikkönen was 19th after missing out on the morning session with a technical issue. 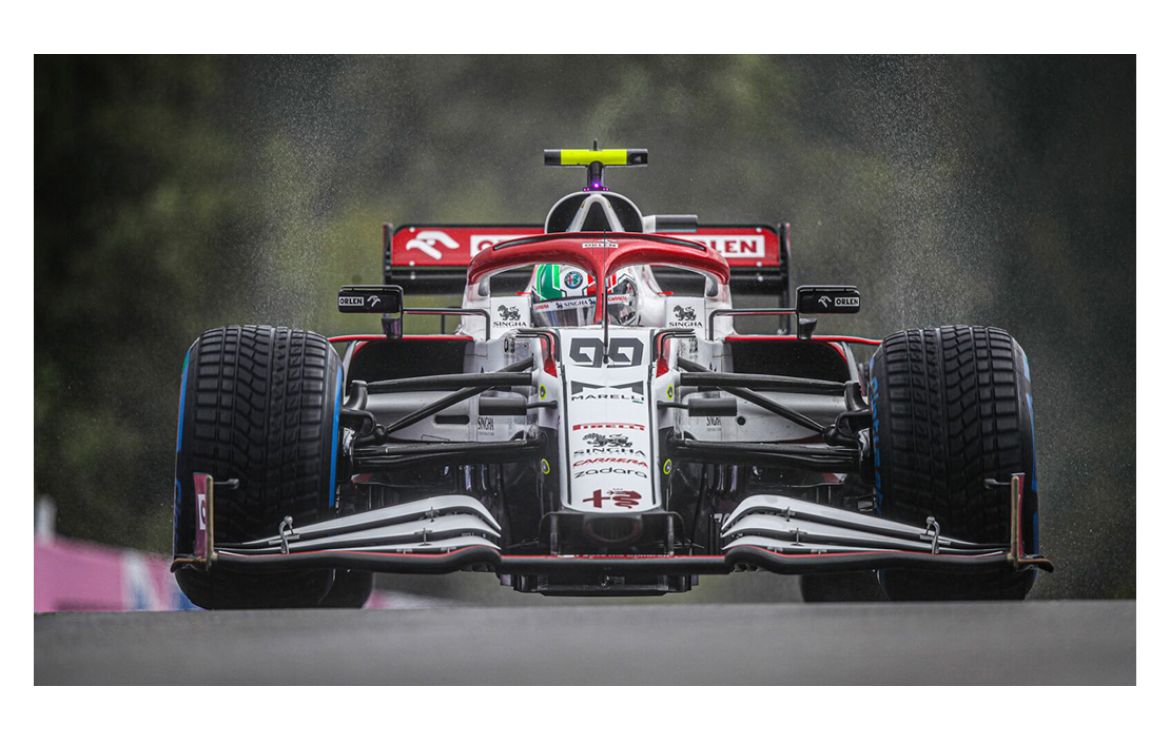 Alfa Romeo Racing ORLEN endured a challenging Saturday afternoon in Belgium, during a very wet qualifying session in Spa-Francorchamps. Antonio Giovinazzi was the first to miss out on a place in Q2, setting the 16th fastest time, while team-mate Kimi Räikkönen was 19th after missing out on the morning session with a technical issue.

Spa has traditionally got us used to treacherous conditions, but even then, the weather on Saturday afternoon was among the most difficult to tackle on this track. The standing water on the surface caused the session to be delayed by nearly 15 minutes and, when the action finally got underway, it was more a case of tip-toeing around the soaked circuit in an attempt to set a time.

Tyres went from wets to intermediate, trying to suit the conditions as best as possible, but in the end it was not an easy day for anyone on track, no matter the compound. Antonio went close to booking a place in the top 15, but his attempt fell just short: he qualified 16th, ahead of one of the AlphaTauri cars but agonisingly out of the second section of qualifying. Kimi, who had missed most of the final practice session, carried out in wet conditions, was 19th to compound a difficult day for the team.

Conditions tomorrow may be similar to today: rain, as always, brings a great reset to the field and, with it, the chance to recover from today’s result. It will be a race of grit and guts, in weather that may well make the race into a lottery. We’ll give 100% and take our chances.

Frédéric Vasseur, Team Principal Alfa Romeo Racing ORLEN: “Today’s result was disappointing, especially in conditions that can mix up the order. We were not able to get the most out of the session: Kimi suffered missing third practice in the morning, and we think he would have been close to where Antonio was, closer to Q2. We’ll regroup and look at ways to make up the lost ground tomorrow: the weather conditions may well be similar to today’s, which means we can still take our chances to make up places. We’ve seen crazy races in Belgium before and tomorrow may be another: if so, we’ll be ready.”

“A bad day that started off this morning, missing out the practice session in the wet. I had to use Q1 to figure out the lines to take and we just didn’t have enough laps to make up the lost ground. I am sure that with a few more laps, we would have been a lot better. Not a lot of positives to take from today, but we can only go up tomorrow: we will try our best and see what we can get out of a race in these conditions.”

“I gave everything I had, but it was not enough. I was improving lap after lap, first on wet tyres and then intermediates, and with one more round we would have been even better, but we ran out of time. In the end, it was the same for everyone and we fell short. The conditions for tomorrow are likely to be similar to today’s, so we need to be ready to take any opportunity, especially if the race turns into chaos. We have to improve on what we did today, that’s for sure.”