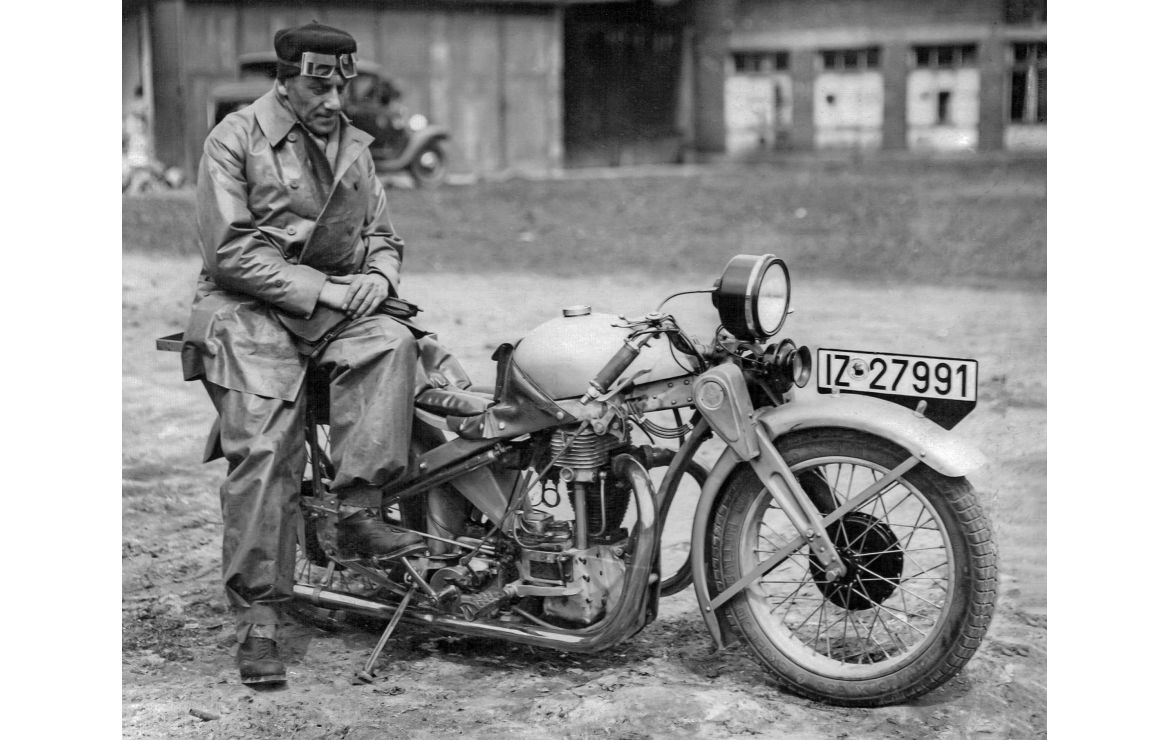 Rüsselsheim.  The description “universal genius” applies to Ernst Neumann-Neander like no other. The painter, designer, cabaret artist, businessman, racing driver and engineer is connected to Opel by the brilliant “Motoclub” motorbike. Produced between 1928 and 1930, the Opel Motoclub was unique thanks to its innovative pressed steel frame. This construction method was Neumann-Neander’s idea. With the new technology Opel was able to cut the usual assembly time of a motorbike from between 15 and 25 hours to around only four hours – a revolution in motorcycle production. This allowed Opel to offer an excellent product at an attractive price in the shortest time possible, making individual mobility affordable for many – similar to the Opel 4/12 hp “Laubfrosch”, the first German car built on an assembly line.

The designer of the Motoclub was born as Ernst Neumann on September 3, 1871 in Kassel, Germany. At the age of 19 he was already a successful racer of penny-farthing bicycles. His first jobs were as a cartoonist and illustrator. In addition to his artistic activities, which were strongly influenced by Art Nouveau, and appearances in cabaret in Munich, he was always interested in speed and technology. Since childhood he had been fascinated by the development of motorisation at the end of the 19th century. His first self-made motorbike appeared in 1904 and he used it to complete in hillclimbs and long distance races such the Paris-Rome-Paris.

In 1908 he founded the advertising agency “Ateliers Ernst Neumann für Moderne Reklame” and shortly afterwards added bodywork design to his portfolio. In the early 1920s he created designs for coachbuilders, including the Hessian company Kruck that worked closely with Opel.

After World War I Neumann named himself “Neumann-Neander” (Neander meaning “new man” in ancient Greek). His work now concentrated on the design and manufacture of motorcycles under the name “Neander”. They were characterised by elegant design, lightweight construction, good ride comfort and unconventional technical solutions. By now known by his nickname N2, Neander received the first prize “in all categories for the best improvements to the motorcycle” in a 1924 competition for inventors in Stuttgart. At around the same time he was a guest at the Opel Rennbahn in Rüsselsheim, where the young Fritz von Opel was the host. The grandson of company founder Adam Opel and Neumann-Neander agreed on an exclusive licence: from now on, the Neander pressed steel motorbike would also be produced and sold by Opel.

Opel specially developed an engine for “the best handling machine in the world” (according to Neander advertising) – a 500 cc, one-cylinder unit available with a choice of two power outputs (16 and 22 hp). The matt silver of the galvanised, unpainted metal contrasted with the red saddle, red parts and even red tyres to create a distinctly modern look. The new model was introduced under the name “Motoclub”, accompanied by an extensive advertising campaign, at a price around 10 per cent lower than that of similar Neander machines, which remained in production. Neander also made an Opel-recommended sidecar for the Motoclub called “Pioneer” that was available from many Opel dealers.

The Wall Street Crash of 1929 brought an abrupt end to the Neander company and the Opel Motoclub in the following year. While Opel consolidated its status as the most successful German car brand in the economically difficult period, the now 60-year old N2 gradually receded into the background. His best-known designs from this period (1934-39) are the unconventional four-wheeled “Fahrmaschinen”. These lightweight racing cars were a mixture of motorbike and car and scored respectable results in motor sport.

Neumann-Neander retained his passion for creative solutions, even in old age. He created numerous bikes and trikes until 1950, but not for production. At the end of the 1940s, a now elderly N2 began the last chapter of his richly varied life and took up painting again. In five years he painted more than 100 pictures.

Ernst Neumann-Neander died on November 13, 1954, aged 83, leaving behind an extraordinary and multifaceted work. The Opel Motoclub is a small part of it and a drivable 1928 “Supersport” stands proudly in the Opel Classic Collection today. This unique motorcycle keeps alive the memory of the universal genius N2 – especially on his 150th birthday.