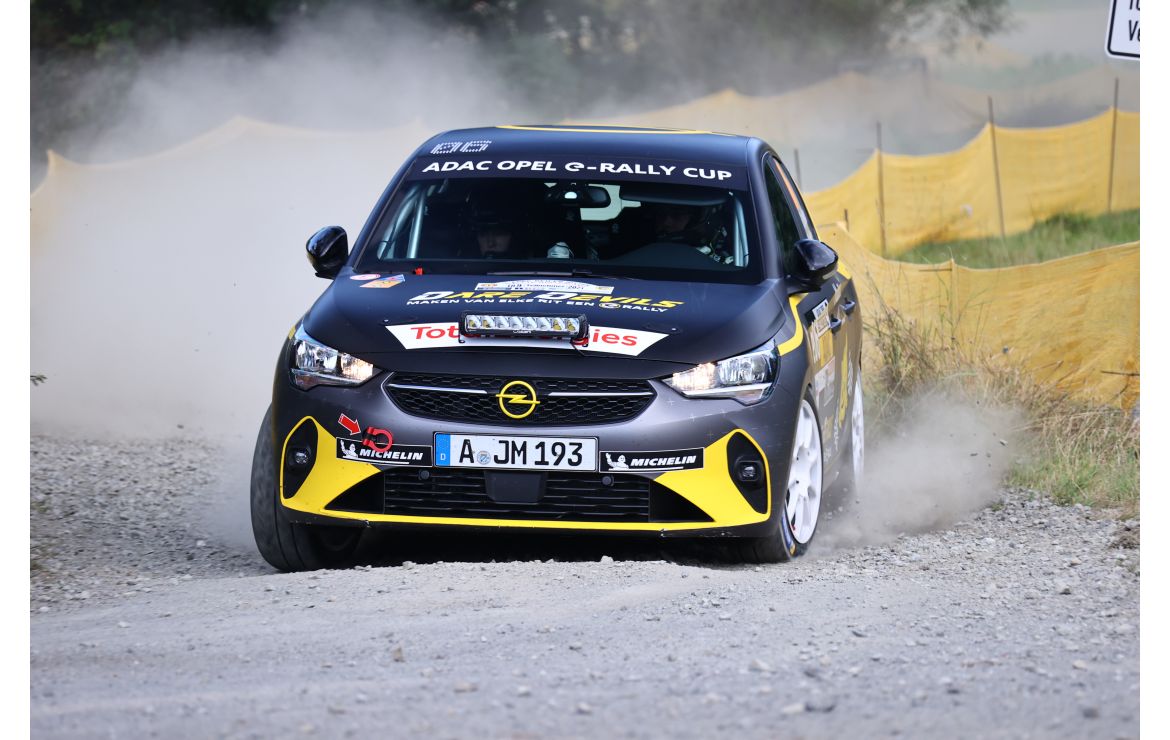 Rüsselsheim.  Already in its first season, the ADAC Opel e-Rally Cup has established itself in the motorsport landscape and made an important contribution to the future of rallying in Germany. The eagerly awaited first electric rally one-make cup worldwide thrilled with the dynamics of the 100 kW/136 hp Opel Corsa-e Rally as well as with a strong field of participants that united young talents from six nations and guaranteed exciting rally sport.

The seven rounds – three each within the framework of the German Rally Championship and national R70 events as well as, as a highlight, the start at the Czech round of the European Rally Championship in Zlín – proved the integrity of the revolutionary concept. “We have shown that electric rallying works”, states Opel Motorsport Director Jörg Schrott. “In order to master the many challenges of such a pioneering project, you need innovative spirit, courage and strong synergies. And we had these thanks to our partners. I would like to emphasise the ADAC, with whom we have been working successfully for many years and who were convinced of the project from the very beginning. Also partners from the very beginning are TotalEnergies and eLoaded. Without the specialists from eLoaded, who developed the charging infrastructure together with us, the professional implementation of the ADAC Opel e-Rally Cup would not have been possible.”

In sporting terms, one driver in particular made his mark: The 26-year-old Frenchman Laurent Pellier from the Saintéloc Junior Team celebrated no less than six victories this season and thus crowned himself the first ever winner of an electric rally one-make cup. Pellier: “It was a great feeling to win the first event in Stemwede and it is an equally great feeling to now be able to call myself the first champion of the ADAC Opel e-Rally Cup. I was excited to find out about such a completely new series, but my expectations were exceeded. Electric rallying is no less fascinating than rallying with combustion engines, and I had a blast doing it.”

In the battle for the runner-up position in the ADAC Opel e-Rally Cup, the young German Max Reiter prevailed in the end. Following his victory in the ADAC 3-City Rally, the 21-year-old finished third in the AvD Saxony Rally finale, leaving his rivals Timo van der Marel (32, Netherlands) and Luca Waldherr (27, Austria) behind him in the final standings. In the end, four drivers from four different nations ended up in the first four positions in the overall standings.

The ADAC Opel e-Rally Cup also immediately found new friends outside the regular field of participants, in the ranks of prominent guest drivers such as WRC star Yohan Rossel as well as in great circuit racers Timo Scheider and Lance David Arnold, who displayed their talents in the Corsa-e Rally.

Strong debut of the Opel Corsa Rally4 against tough competition

The Opel Corsa Rally4 also made an impressive mark in its first year of homologation. The 153 kW/208 hp customer car celebrated numerous class victories and podium places both in Germany and in other European countries. In their first international outing at the Barum Czech Rally Zlín, Opel factory driver Marijan Griebel and Tobias Braun in the Corsa Rally4 had the strong international competition in their category under control when they were stopped by a defect shortly before the finish. “That's just what happens in a rally”, said Griebel. "It was much more important to prove that the Corsa Rally4 is fully competitive even in this extremely strong competitive environment. And we undoubtedly did that.”