Leasys turns twenty: from LTR operator in Italy to a European player in new mobility

Founded in 2001, the company has grown over the years to become the Stellantis brand leader in long-term rental in Italy and among the main players in Europe.  A twenty-year history of excellence, with a flexible and heterogeneous 360° mobility offering designed for private individuals, professionals and businesses of all sizes. By 2024, the company aims to complete the 'sustainable mobility revolution' project it launched more than a year ago. 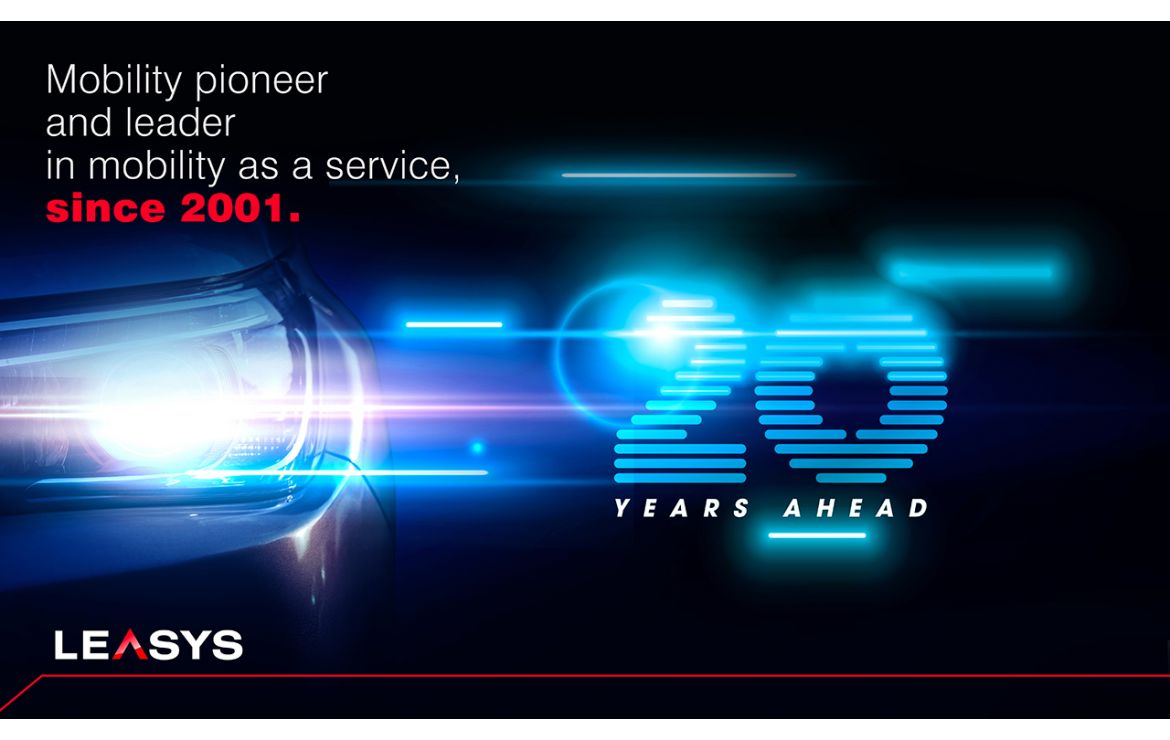 Leasys, a Stellantis brand and a subsidiary of FCA Bank, celebrates its 20 years in business. Two decades of history, founded on solid experience in mobility services, which saw the company become a leader in Italy in the long-term rental sector and among the first in Europe. An important milestone for Leasys, reached in a process of growth that shows no sign of abating. The company is celebrating this achievement by announcing that, by the end of the year, there will be more than 400,000 vehicles in its fleet and more than 600 Mobility Stores in Europe, to support a 360° offering ranging from short/medium-term to long-term rental, to car subscription, to car sharing.

Leasys started in 2001 as a B2B long-term rental operator in Italy. In 2005 Fiat became the sole owner of the company, which the following year became part of FGA Capital, now FCA Bank, together with Savarent (also active in the long-term rental sector). In 2010, Leasys and Savarent merged into a single company.

Year 2016 marked an initial turning point for Leasys, which came under the full control of FCA Bank, an equally-held joint venture between FCA Italy S.p.A. and Crédit Agricole Consumer Finance. Since then, the company's growth has accelerated significantly, with the launch of Be Free, a long-term rental plan for private individuals that marked its entry into the B2C rental market. Furthermore, in 2017, Leasys started its expansion in Europe, which has led it to establish operations in 11 other European countries: Austria, Belgium, Denmark, France, Germany, Greece, the Netherlands, Poland, Portugal, the United Kingdom and Spain.

A second crucial event in the evolution of Leasys took place in 2018 with the acquisition of Winrent, one of the leading car rental companies in Italy, which enabled the company to enter the short-term rental business and eventually pursue expansion in this space thanks also to the acquisition of similar companies in France, Spain and the UK. A year later, with the inauguration of the Leasys Mobility Store network and the launch of Leasys CarCloud, the first car subscription formula accessible through Amazon, the company reached full maturity, establishing itself as a leading player in the European 360° mobility market, with solutions "from one minute to a lifetime" driven by the trends of sharing, disownership and the subscription economy.

Finally, in 2020, the start of a new phase, represented by the beginning of the "sustainable mobility revolution" project, together with FCA Bank. The initiative has already led to the electrification of all European stores and the creation of Italy's largest private network of EV charging stations. The electric strategy has also affected the Leasys fleet: the company intends to have more than 50% hybrid or electric v vehicles in its short term fleet by the end of 2022. The commitment to sustainable mobility culminated in 2021 with the launch of the LeasysGO! electric car sharing scheme and the issue of the first €500 million green bond on the capital market.

Leasys, a Stellantis Brand and a subsidiary of FCA Bank, a 50:50 joint venture between Stellantis and Crédit Agricole, was established in September 2001. Leasys provides a complete and innovative system of mobility services to individuals, professionals and businesses of all sizes: from short-, medium- and long-term rentals to peer-to-peer car sharing via the U Go platform and I-Link. At the end of 2019, it launched the first car subscription service in Italy with CarCloud. With the Clickar brand, Leasys is also one of the leading Italian online and offline retailers of pre-owned company cars to individuals, professionals and companies. Headquartered in Italy, Leasys began a process of internationalization in 2017 by opening multiple offices throughout Europe: today the company operates in Spain, France, the United Kingdom, Germany, Belgium, the Netherlands, Portugal, Denmark, Greece, Austria, and Poland, managing a fleet that will have over 400,000 vehicles by the end of 2021. In June 2019, the company launched the Leasys Mobility Stores, physical outlets with a grassroots presence across Italy. The Stores, which provide customers access to all the mobility services provided by Leasys, are now available in France and Spain as well and will open soon also in the other European countries where the company is operational. With the launch of the first totally electrified Mobility Store in Torino Caselle airport in 2020, followed by many others, Leasys has become a key operator also for sustainable mobility. In fact, thanks to the over 1,000 charging stations installed in all the stores, Leasys has Italy’s largest private electrified network. In 2021, the electrification project will continue also in the European countries in which Leasys operates: www.leasys.com