Manzù’s prototype for the Fiat City Taxi stars in the "Che macchina!" (“What a car!”) exhibition

MAUTO celebrates the 50th anniversary of the Fiat 127 and pays tribute to its designer, Pio Manzù. 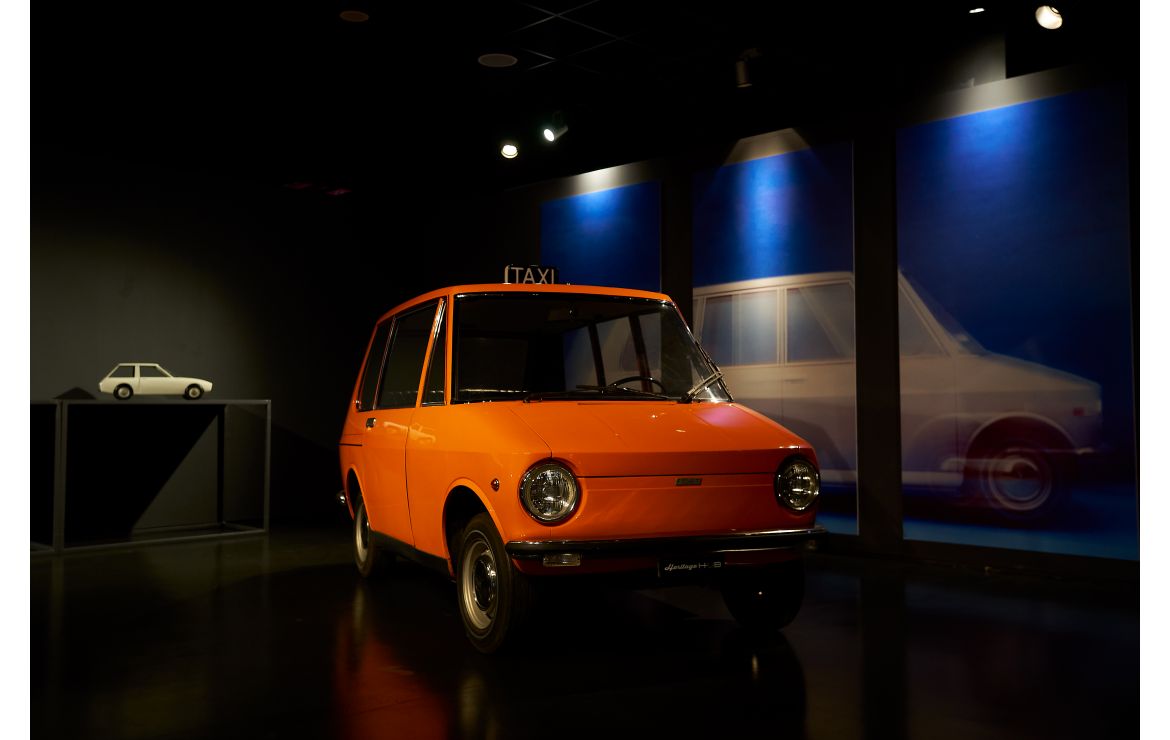 Until September 5th, the Museo nazionale dell’Automobile, Turin (MAUTO) is hosting the exhibition “What a car!”, focusing on the Fiat 127, which celebrates its 50th anniversary this year. The exhibition also pays tribute to the designer whose came up with its form: Pio Manzoni, aka Manzù, son of the established sculptor Giacomo.  The exhibition name is taken from the launch campaign for the first series and sums up how everybody was left dumbfounded by the innovation of the 127. This model would go on to become one of the most beloved Fiat cars ever.
The figure of Pio Manzù and the genesis of the Fiat 127 will be the focus of a lecture, due to take place at 10:30 am on July 6th, at the Museum auditorium. The speakers will include Roberto Giolito – Head of Heritage at Stellantis, together with the former Director of MAUTO Rodolfo Gaffino Rossi, and Luciano Galimberti, President of ADI – Association for Industrial Design.

The exhibition for the 50th anniversary of the Fiat 127, designed by Pio Manzù

The Fiat 127 was a truly modern car for its time – roomy on the inside and small on the outside, just like the still highly relevant mobility vision of the designer Pio Manzù, who died prematurely in 1969. This is the winning combination that makes the exhibition an unmissable event, its curators the journalist Giosuè Boetto Cohen and Giacomo Manzoni, the designer's son. To be thanked for mounting the exhibition are the collaboration of the Manzoni Art & Design Foundation, and technical contributions from Heritage, the Stellantis department working on the protection and promotion of Alfa Romeo, Fiat, Lancia and Abarth’s historical heritage.
Visitors can admire 6 models of the subcompact unveiled in 1971, named “Car of the Year” in 1972: two first-series 127s, the Rustica, the Sport, the Top, and the Panorama. These constitute are a small but significant selection of the multiple versions produced until 1987, a total of over 5 million units of which were made. Alongside the cars are drawings, models, prototypes and plans made by Pio Manzù in his lifetime: from the Parentesi lamp, made together with Achille Castiglioni in 1968, to the revolutionary 1964 Autonova FAM, the first minivan in modern history.
A source of great fascination is the 850-based prototype for the Fiat City Taxi, now part of the priceless Heritage vintage collection and usually on display in the multifunctional space at the Heritage HUB in Turin.

An original non-line-based city public transport project, it boasts various technological innovations aimed at safety and functionality, so much so that it can rightfully be defined as a true concept car. Suffice to say that Fiat registered as many as 15 new patents to develop the 850 City Taxi. Of course, the prototype unveiled at the Turin Motor Show remained at the experimental stage, although many of its innovative solutions, developed at length by the Centro Stile Fiat, were later used in mass-produced cars. The lines, especially those of the rear engine bonnet, were taken up again in the 1972 Fiat 126 subcompact, first a companion piece then the replacement for the glorious Fiat 500.

Historical context and the collaboration with Pio Manzù, one of the most creative designers of the time

It made its debut on October 30th, 1968, at the 50th Turin Motor Show. These were the years of student and social protests, but at the same time, cities were experiencing a period of euphoria. Taking to the streets were many taxis based on the ingenious Fiat 600 Multipla, created by Dante Giacosa in 1956 and developed in parallel with the extremely popular Fiat 600, from which it was derived. In 1964 and until the last model was produced in 1969, the Turin automaker juxtaposed the 600 with its natural successor: the Fiat 850.
In the same period, Fiat designers were looking into creating a version of the 850 expressly focused on public transport, to replace the then-dated 600 Multipla. Not a mere tune-up of an existing car, it was a vehicle designed from the outset for use as a taxi. At the time, the inspiration of the great Italian coachbuilders was expressed in designs for specific cars. However, in this case, the task was entrusted directly to the Centro Stile Fiat, which for the first time availed itself of the external collaboration of one of the most creative designers of the era: Pio Manzù.

The project began with the mechanics of the Fiat 850: to facilitate intensive urban usage, the “Idromatic” version was chosen. Unveiled at the 1966 Geneva Motor Show, it featured a torque converter around the hydraulic clutch, to make it easier to drive in the city. Not an automatic transmission, it was a system with no clutch pedal that left unchanged the 4 gears of the 850 Super. The description given was “power-assisted transmission”, the nameplate on the bonnet bearing the wording “Idroconvert”, which in the meantime would replace the name previously used at launch.

The dimensions were compact, but the space was exploited to the max, both to favor flexible use in the city and to make it easier for passengers to get in and out. The two-volume form, with reduced overhangs, had rather tight lines, with a short, sloping front bonnet, large windows to give passengers a great view of the cityscape, and a passenger compartment aligned higher than usual to improve comfort on board. The orange bodywork was aimed at making it easier to recognize as a means of public transport, at a time when taxis were still decked out in green and black.
More so than its increased height, the 850 City Taxi stood out for its asymmetries: on the left side was a conventional door for driver use only, whereas the passengers got in through an atypical and innovative electronically controlled sliding door on the right-hand side. The differing dimensions of the doors also resulted in divergent measurements of the first 2 side windows. The 2 windshield wipers were especially long, given that they had to clean a windscreen that was placed much higher than normal: on the driver's side, the wiper was designed in a “pantograph” configuration, consisting of two arms. As seen in certain coaches at the time, it remained vertical at rest. By no means was the other windshield wiper conventional, moving as it did in an arc from the inside to the outside of the window, the opposite direction from other Fiat cars of the era.

The rear seats had space for 3 passengers: if room for a 4th was needed on occasion for short journeys, an extra fold-down seat was placed next to the driver. The folding seat was usually up and the space to the driver’s right side was used for luggage, which could be secured in place with a special strap. Other bags could be put in the space behind the rear seats, above the engine. Access to the latter compartment could also easily be gained from the outside, through a large glass door. The specifics of the interior carried on even further: the Fiat City Taxi featured a futuristic dashboard upholstered in a flexible material, covering the instrument panel and the taximeter. It is still considered an innovation to this day! A small TV screen was also upholstered in the same material. The driver could also talk directly with their switchboard via a radiotelephone, with its microphone built into the sun visor.

Innovative solutions for the utmost safety

Safety innovations are essential, and would later become standard in mass-produced cars. These included an articulated steering column to safeguard the driver in the event of a frontal impact, a dashboard upholstered in a flexible material, and straps to secure any luggage in place. The radiotelephony communications system, with its microphone in the sun visor, was another forerunner of the present-day handsfree system for mobile phones. The TV located in the middle of the dashboard can also be considered the precursor of modern infotainment system screens. Some of its functional solutions were taken up again years later, such as the glazed tailgate as used in hatchbacks, or the card pocket in the ceiling, still seen today in minivans.