The book “100 ans de Publicité Citroën” (“100 years of Citroën Advertising”), written by advertising legend Jacques Séguéla, is available in a collector’s edition on the website of the Citroën lifestyle e-shop: www.lifestyle.citroen.com. Two other books on the history of the brand and its models highlight the players, innovations, design, etc., explaining why Citroën is one of the most collected brands in the world. Find all the visuals here: https://bit.ly/2UQ0EW2 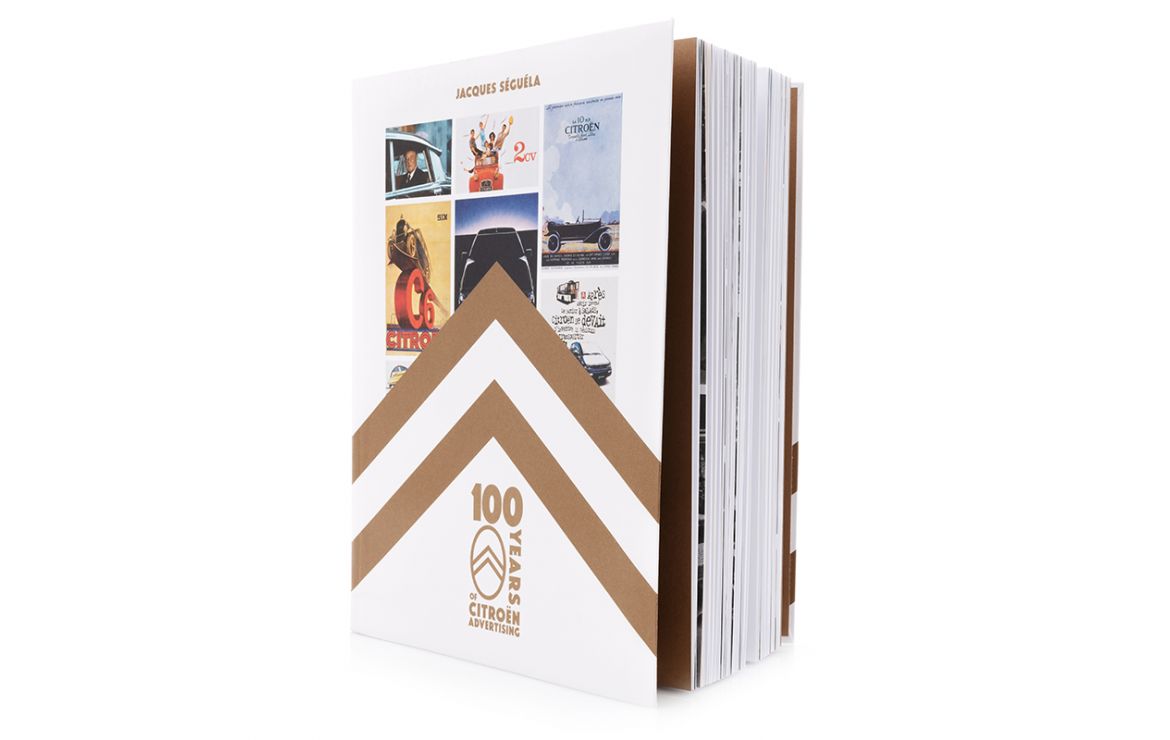 Its iconic designs, technical innovations and bold players make Citroën a unique industrial adventure that has revolutionized the automotive industry since 1919. André Citroën has also made history with his avant-garde advertising design. Since the inception of the brand, André Citroën has invented a very innovative way of communicating. In particular, the brilliant idea of an aeroplane writing the name CITROËN across the Parisian sky in a plume of smoke stretching over several kilometres comes to mind, along with the Eiffel tower sporting the CITROËN name and big events like the legendary Croisière Jaune and Croisière Noire (the “Yellow Cruise” and “Black Cruise” respectively). This taste for visionary and inspired communication will continue long after the death of the founder. In 100 years, between classic models and resounding speeches, Citroën has created a special place in the French imagination.

In “100 years of Citroën advertising” (Flammarion – €29), published in French and en, Jacques Séguéla - who has accompanied the Citroën brand for many years - proposes discovering the brand by what constitutes a strong marker: advertising. “This book is a biopic, the true novel of a brand above all others and a man above all men. André Citroën invented almost all forms of advertising: promotion, credit, PR, events, publicity cars, rallies, not to mention the first car ad, the first female ad and the first aerial advertising. He wanted the first three words spoken by every child to be “Daddy, Mommy, car”. The public will change its slogan into “Daddy, Mommy, Citroën”. Is there a more beautiful tribute to a brand? It was my first budget, as well as my first love; it still is, sixty years later. The brand of my life, my brand for life has in its own way written the most beautiful industrial and advertising pages of the last century, those where France astonished Europe and the world with its thirst for progress and hunger for conquest. The adventure continues with the same passion of inventiveness and creativity that makes Citroën the favourite car brand of the French. ”

Organised chronologically and richly illustrated, in 252 pages the book covers many themes related to CITROËN and the history of the automobile: model design, iconic advertising action, major events... and draws a watermark portrait of France during the twentieth century.

Jacques Séguéla is one of the most famous advertisers in France, co-founder of the RSCG communications agency in 1970. In several exclusive videos, he evokes the brand of “his” life and shares anecdotes about the most iconic Citroën commercials: https://bit.ly/2UEztZf

Discover every Thursday these videos online, talking about:

On the occasion of the CITROËN’ Centenary, the lifestyle e-shop expands its offer of works dedicated to the history of the brand and its models:

The book goes over the first hundred years of the brand, marked by creations that have revolutionized the history of the automobile, and one that is punctuated by outstanding events and personalities.
The authors of “ 100 Years of Citroën ” (Publisher ETAI ALBUMS), Serge Bellu, Sylvain Reisser and Olivier de Serres tell this wonderful story. Here, it is not a question of chronology, but of approaching the century long history of Citroën through the people and the events which inscribe the brand well beyond the world of the automobile in France and worldwide - €89

The Traction Avant, born in 1934, is inseparable from the history of Citroën. Paving the way for the modern automobile thanks to its many technological innovations, the Traction Avant inspired several works of the collector Olivier de Serres including “ Citroën Traction Avant ” (Le Faune Editeur). It chronologically outlines all the variations of a model produced between 1934 and 1957. Each model is presented by a short note, then by beautiful general and detailed shots that are largely captioned - €49

All these books can be found on the Citroën Lifestyle e-shop: www.lifestyle.citroen.com. Delivery is possible in ten European countries: Metropolitan France, Germany, Spain, Portugal, Belgium, Luxembourg, Italy, the Netherlands, Poland and Great Britain.

At the heart of the automotive market, Citroën has asserted itself since 1919 as a popular brand in the true sense of the word, making people and their lifestyles its first source of inspiration. A spirit underlined by its ‘Inspired by You’ signature and embodied by cars combining unique design and benchmark comfort. Within the sector of mainstream brands, Citroën also stands out with a unique customer experience (Citroën Advisor, ‘La Maison Citroën’, etc.). In 2018, the Brand sold 1.05 million vehicles in over 80 countries.