CITROËN will be at the Retromobile show (Paris, 3 to 7 February 2016) with its Méhari, from May 1968. Doubtless the most impertinent of all CITROËNs, Méhari revolutionized the cabriolet world with its plastic body, pop colours and unashamedly chummy attitude. Some 48 years later, CITROËN is reviving this unique spirit with E-MEHARI, an all-electric successor to its illustrious forebear, making its début appearance before the general public. Visitors to the show are in for a real ‘back to the future’ experience! 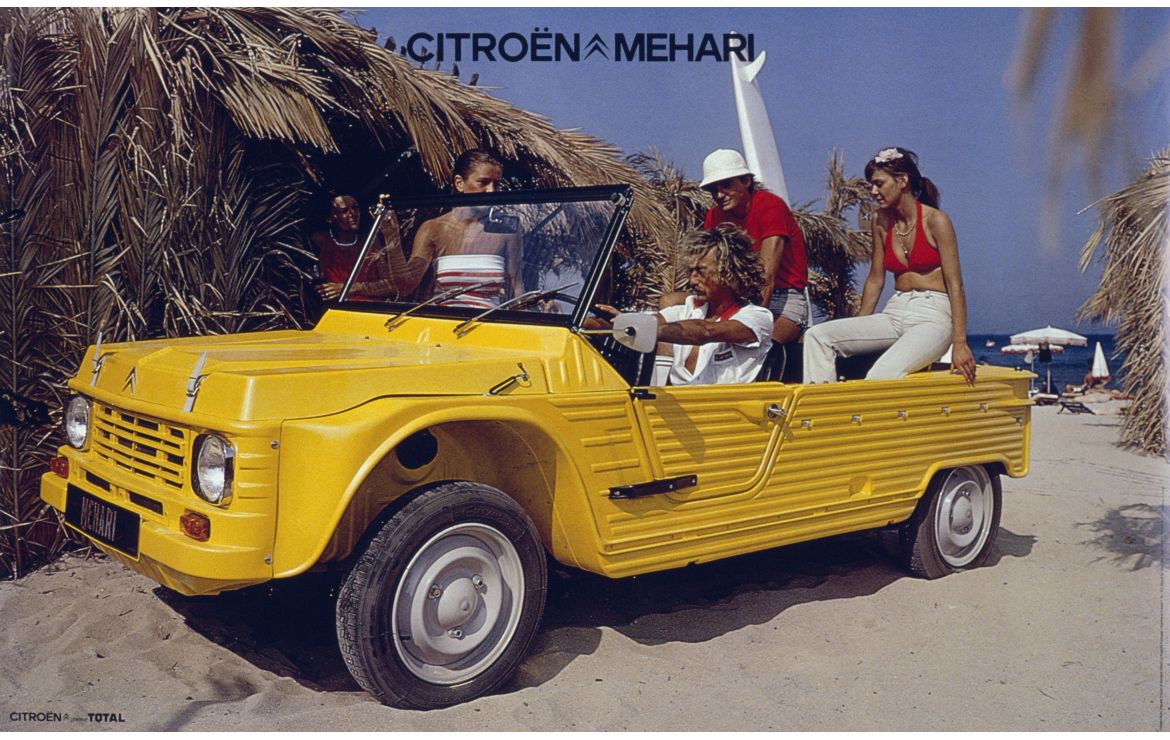 In May 1968, with what seemed like a whole generation on the streets of Paris in a wild quest for freedom, CITROËN unveiled a leisure vehicle way ahead of its time: Méhari, a completely atypical cabriolet built on a Dyane 6 chassis. Nobody at the time had ever seen anything like it: its fresh, brash and completely unpretentious attitude marked a full-scale revolution on the cabriolet scene.

Méhari was versatile, practical and economical. It made a perfect partner for seaside escapades, with its ingenious body in ABS plastic bringing light weight (525 kg) and total corrosion-resistance. You could even wash the car down completely using a simple hose. With its pop colours, it was offbeat yet perfectly friendly and optimistic, and eminently adaptable.

The chummy little CITROËN met with instant popular success, and soon became a symbol of freedom, extolling the joys of a simple, carefree lifestyle. It also enjoyed a considerable career on the silver screen (as in the highly popular “Le Gendarme” series with Louis de Funès) and on the roads of the world (Liège-Dakar-Liège in 1969, Paris-Kabul-Paris in 1970, etc.). And it even gave loyal service in the French army and police forces. Production of CITROËN Méhari was finally discontinued in 1987, after a career spanning close to 20 years, with production totalling 145,000 units.

Nearly 30 years after the close of this saga, an endearing chapter in CITROËN’s history, CITROËN is reviving the Méhari spirit of unconventional design harnessed for happiness. Specifically, CITROËN is announcing a successor to Méhari, in the form of E-MEHARI. The new model carries in many of the key features of its predecessor (bold, versatile, four-seater cabriolet in bright colours, with plastic body and fully washable interior, etc.) and adds the advanced technology of an all-electric power unit (with LMP battery developed by the Bolloré group), fully consistent with the new car’s spirit and typical usage patterns. CITROËN will be releasing E-MEHARI in the spring, but in the meantime visitors to the Retromobile 2016 show (Paris Porte de Versailles Exhibition Centre, 3 to 7 February 2016) can enjoy a preview of the new model, alongside its distinguished forerunner, the original Méhari, for an unforgettable ‘back to the future’ experience.

As well as Méhari, other legendary vintage CITROËNs on show (with participation from CITROËN collectors’ clubs) include the C6 from the nineteen-thirties, the Traction, an emblematic pre-war model, the 2 CV van, celebrating its 65th birthday this year, and the CX from the seventies.