- On the occasion of the International Automobile Festival, Citroën was doubly rewarded during the opening ceremony of the 34th hosting of this major automotive design gathering, with the Award for Art and the Award for most beautiful advertising film of the year. - From today, the audience can discover the fruit of the collaboration which has been rewarded: the E -MEHARI Art Car designed by Jean-Charles de Castelbajac produced to celebrate Méhari’s 50th birthday. This unique model is on display from 31 January to 3 February at Les Invalides for the whole duration of the Festival. 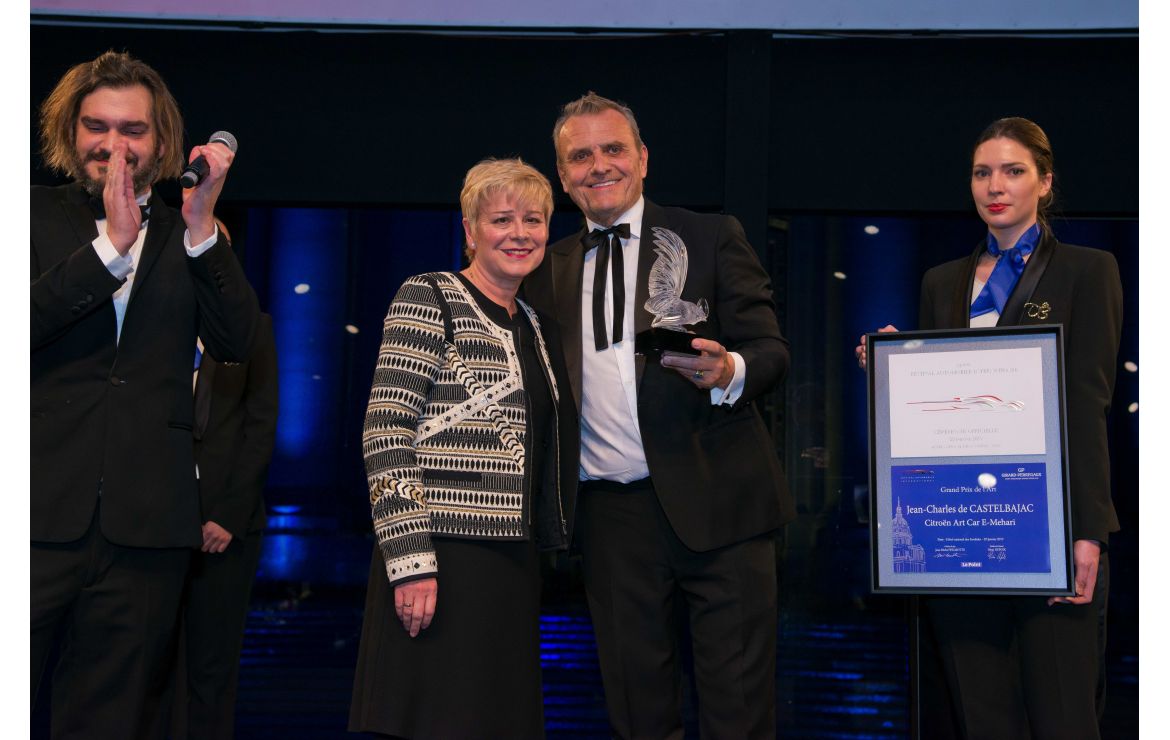 At the opening of the International Automobile Festival which is taking place until 3 February in Paris, the ceremony saw Citroën win two awards:

- Award for Art, with the collaboration between Citroën & Jean-Charles de Castelbajac.

- Award for most beautiful advertising film of the year, with the ‘hitchhiker’ Brand Campaign.

On the occasion of Méhari’s 50th birthday in 2018, Citroën called upon the designer Jean-Charles de Castelbajac to create an exclusive E-MEHARI Art Car, a real expression celebrating 50 years of freedom and creation. Méhari is an automotive icon born in May 68, a period which corresponded with the beginnings of the designer himself. 50 years later, its worthy 4-seater and 100% electric successor, E-MEHARI, became the playground for a collaboration set under the banner of the creative revolution. A natural and obvious coming together for a result full of freshness and zest for life.

This unique model is on display from 31 January to 3 February at Les Invalides for the whole duration of the Festival.

Through this unique Art Car, Jean-Charles de Castelbajac has made E-MEHARI the emblem of a ‘Made in France’ way of life, which is optimistic and popular. Because banning is banned, the E-MEHARI Art Car awakens creative minds and declares its two reasons for existing: art and fashion.

This collaboration continued at the end of 2018 with the launch of the C3 JCC+ limited edition. An interpretation of the Brand’s best-seller, a true fashion car sold in only 99 units for France and 100 units for Japan and which takes the opposite direction to the Art Car by sporting an elegant black body jazzed up with coloured inserts.

As Linda Jackson, Citroën CEO, underlined on stage, “Citroën means boldness and creativity! Along with comfort, design is a key feature of our models. In addition, we are regularly inspired by the worlds of fashion and design, like with our recent partnerships: Jean-Charles de Castelbajac of course, but also Courrèges, ELLE magazine, plus Milan Design Week for several years.”

Award for most beautiful advertising film of the year, with the ‘hitchhiker’ Brand Campaign

In 2019, Citroën is celebrating its 100th birthday: 100 years of boldness, innovations, sporting exploits and iconic advertisements. These are all of the ingredients that we find in the Brand campaign which has been rewarded.

The film takes in different eras, in which the Citroën models support a hitchhiker’s desire for freedom, as a passenger on board one iconic vehicle after another. A real ode to freedom, the film shows Citroën’s history which began in 1919: “We have shared the same love for freedom for 100 years”.

The images are accompanied by a timeless musical success, “Take the long way home”, sung by Roger Hodgson, co-founder of SUPERTRAMP.

Arnaud Belloni, Citroën Marketing and Communication Director, underlined when receiving the award that “it is quite rare today for a brand to dare to make a Brand film like this, that is to say, a film which is not produced to sell such and such a model from the range, but just to express what the brand is by magnifying it. We launched an initial version of this film one year ago and we have added to it with other Citroën icons (Jacques Séguéla on board a DS, Sébastien Loeb, etc.) for Citroën’s centenary which is being celebrated in 2019.”

An international automotive brand at the heart of the mainstream market, Citroën has cultivated boldness and creativity since 1919. Standing apart through their design and ensuring well-being through comfort and technology, Citroën cars like the New C3 and the New C3 Aircross Compact SUV, bring a breath of fresh air to the automotive world. The brand is popular in its noblest sense: its main source of inspiration is people and their lifestyles. This spirit is captured in its signature: “Inspired by You”. It also finds expression through a unique customer experience with its city store concept ‘La Maison Citroën’, its online opinion site ‘Citroën Advisor’ and mobility solutions such as Citroën Rent & Smile and Citroën Earn & Drive. With 10,000 sales and after-sales points in nearly 80 countries, Citroën sold 1.1 million vehicles in 2017. The Brand has also amassed eight Manufacturers’ titles in the World Rally Championship and won three consecutive Manufacturers’ title in the FIA World Touring Car Championship.