In October 1980, Citroën presented the 2 CV 6 Charleston at the Paris motor show. The brand-new special edition was limited to 8,000 units, and was so successful that it was added to the range catalogue in July 1981, until the 2 CV reached the end of production. The last 2 CV produced was also a Charleston, released on 27 July 1990. While the period won’t be featured in any rallies, it’s still possible to (re)discover the 2 CV and admire its chic, quirky character and two-colour exterior 40 years after its launch. 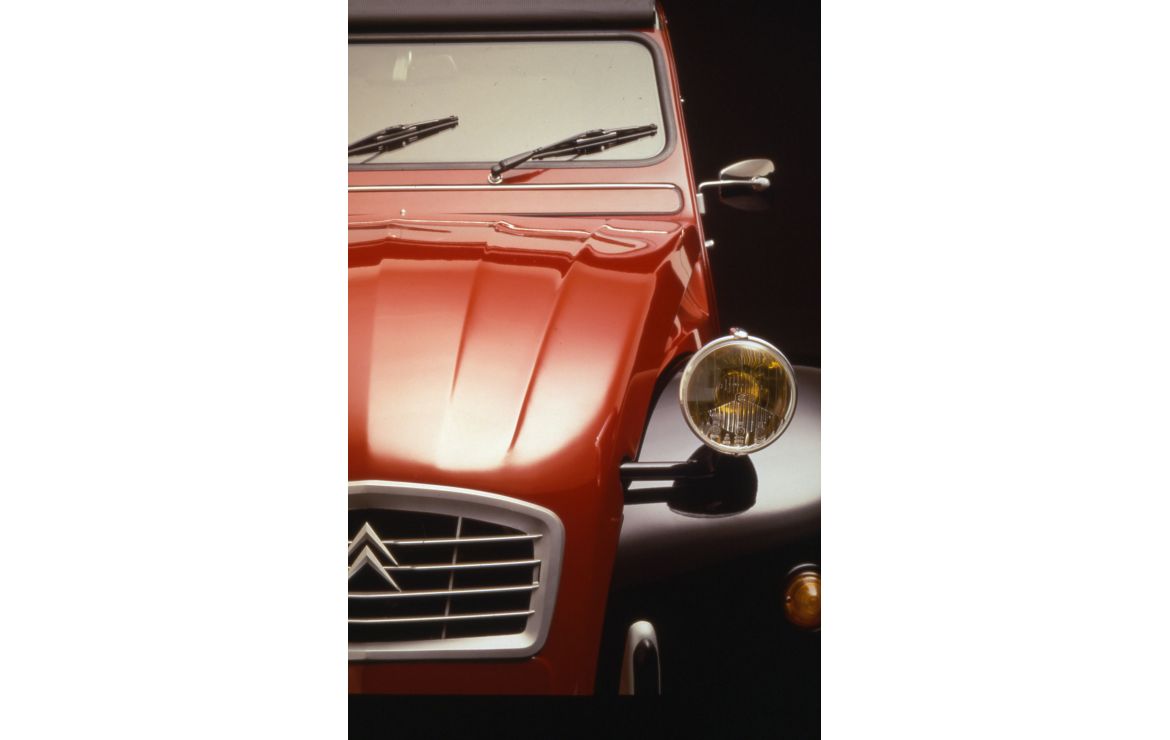 Forty years ago, in 1980, Citroën launched a special series of 8,000 units dubbed “Charleston”, at a price of 24,800 francs. As noted in the press release issued at the time, “to satisfy the 2CV ‘purists’, the headlights are round, with a red housing.” With its chic and quirky style, the 2 CV 6 Charleston embodied the highest degree of finish and power ever seen on the 2 CV. After the Spot in 1976, the 2 CV 6 Charleston rode a new wave of limited editions.

Though its finish was borrowed from the Club, the 2 CV 6 Charleston stood out with its special upholstery and round headlights, like those on the 2 CV Spécial.

The following year, in July 1981, the limited series was so successful that it became unlimited: now mass-produced at the Levallois plant, the model was added to the Citroën catalogue. This version differed from the limited edition with its chrome headlights and grey, diamond-pattern upholstery.

Initially sold in Delage Red and Black, it later came with a Hélios Yellow and Black variant in July 1982, which was then replaced in July 1983 with a version painted in two shades of grey, Night Grey and Cormorant Grey.

Production continued in 1988 at the Mangualde plant in Portugal. The models produced at this site can be identified by their windows, which bear the name of the Spanish glazier, “Covina”.

The 2 CV remains an icon of automotive history and a favourite of numerous collectors around the world. The Charleston contributed to this success over the last 10 years of production.

Today, for a drivable version in good condition, the 2 CV Charleston lists for about €14,500 in its original limited edition, and €10,500 for the catalogue version.

It is still possible to acquire one in the form of a three-inch miniature (€5) or key chain (€4), sold in the Lifestyle Citroën shop. The Charleston is a popular choice, as one out of every five 2CV miniatures sold is a Charleston!

In 2008, for the 60th anniversary of the 2 CV, a limited-edition Charleston was launched based on another model from the Citroën line, which was also a convertible: the C3 Pluriel Charleston, with the same Delage Red and Black exterior.

The 2 CV 6 Charleston has all the charm and simplicity of the 2 CV, but adds an additional touch a playfulness and elegance that fits in seamlessly. Its inimitable two-colour exterior, whose tones are separated by a rounded border, hearkens back to the original 2CV prototype from 1939. The darker colour covers the underbody panels, the wings, and the roof up to the top portion of the windscreen. The lighter colour covers the boot door, the bonnet, the bay, and the contours around the windscreen, as well as the wheels. A border composed of two white stripes curves over the top of the windows, while above, a chrome clip covers the groove around the doors. While the limited edition Charlestons were given Delage Red headlamps, the mass-produced models had chrome lamps. The bumpers are painted metallic grey, and a square-shaped, monogram sticker with the name of the model inscribed appears on the boot door. The underbody panels are equipped with chrome clips, while the hubcaps, which are borrowed from the Dyane, likewise come in chrome. Echoing the finish of the 2 CV 6 Club, the dashboard features a large speedometer and rectangular push buttons to activate the windscreen wipers, the hazard lights and the brake fluid indicator. A single-spoke steering wheel has also been featured on high-end 2CVs since 1976. Two sun visors are installed, including one with a vanity mirror for the passenger. Behind them are two small hooks used to unlock the convertible top so that it can be opened from the inside.

The door interiors are lined with grey fabric, and a black plastic panel, moulded with a handle to help with closing the door, surrounds the door handle and masks the closure system. The limited edition 2 CV 6 Charleston features a broken-check pattern on its upholstery, while the mass-produced version features grey upholstery decorated with diamond-shaped patterns.

Unlike the 2 CV 6 Club and Spécial, the centrifugal clutch option is unavailable. Upon its release and throughout its career, the engine on the 2 CV 6 Charleston never went through any notable changes. In this case, the engine it came with was an A06/635, with a rating of 29 DIN hp at 5750 rpm. This performance was achieved by adding a Solex 26/35 CSIC twin-body carburettor in 1978. Otherwise, the 602cm3 engine, installed in February 1970, retained its main characteristics. The bore and stroke are still 74x70 mm, providing a compression ratio of 8.5 and a torque of 4 mkg at 3500 rpm. The 12V electrical equipment includes a 28A alternator connected via belt to a pulley that drives the nine-blade cooling fan. The suspension extends between the front and rear wheels, which are equipped with coil springs. The drum brakes at the front and rear are controlled by a simple master-cylinder.

TRANSLATION OF THE CITROËN PRESS RELEASE FROM 12 SEPTEMBER 1980

THE 2 CV CHARLESTON AT THE PARIS MOTOR SHOW

To satisfy the 2CV “purists”, the headlights are round, with a red housing.

The wheels are red-coloured, with hubcaps from the Dyane 6.

The front seats and rear bench seat are covered in black and white fabric with a broken check pattern.

This special series will be sold in France and Europe.

The Citroën brand
At the heart of the automotive market, Citroën has been a popular brand in the noble sense of the word since 1919, its main source of inspiration being people and their lifestyles. This spirit is underlined by its “Inspired by You” signature and embodied by cars boasting unique styling and benchmark comfort. Citroën also stands out among mainstream car manufacturers by bringing its customers a unique experience, for example with Citroën Advisor and “La Maison Citroën”. In 2019, the Brand sold 1 million vehicles in more than 90 countries.
Citroën media site: https://int-media.citroen.com