Kimi Räikkönen and Antonio Giovinazzi will line up in P14 and P20 respectively for tomorrow’s Azerbaijan Grand Prix – but it’s a result that masks the team’s strong performance on the streets of Baku. 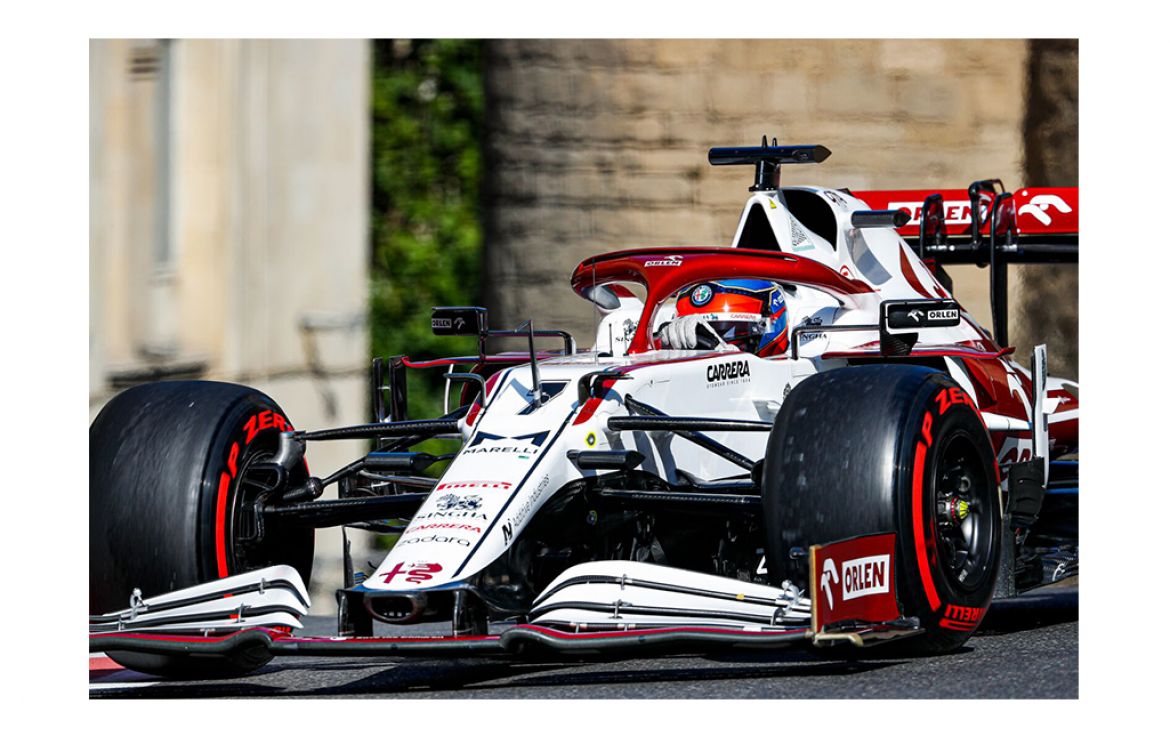 Kimi Räikkönen and Antonio Giovinazzi will line up in P14 and P20 respectively for tomorrow’s Azerbaijan Grand Prix – but it’s a result that masks the team’s strong performance on the streets of Baku.

Pace, there was aplenty. But on a day in which no fewer than four red flags interrupted qualifying – for five separate incidents – the end result didn’t smile on Alfa Romeo Racing ORLEN. Both Kimi Räikkönen and Antonio Giovinazzi had performance on their side, but circumstances meant they were both unable to put it to use. The Italian was unable to set a time after hitting the wall at turn 15 on his first timed lap in Q1: despite the strong performance on Friday, he will line up at the bottom of the grid for the race – a position from which he won in GP2 in 2016.

Kimi performed admirably in Q2 after three red flags had resulted in all his fresh tyres being used: despite the old rubber, he looked set for a time worthy of Q3 before a final interruption of the session caused his final attempt to be aborted. To be within a second of the lead time in Q2 and matching cars on fresh tyres is reason for optimisms ahead of the race.

Tomorrow, as the cliché goes, anything can happen. With the pace we have shown – our best on a Saturday-  we are in with a good shout to do well. Baku is a circuit that can catch drivers out and a Safety Car is never far – which means there’s plenty to fight for from lights to flag.

Frédéric Vasseur, Team Principal Alfa Romeo Racing ORLEN and CEO Sauber Motorsport AG: “This has been our best qualifying performance of the year: I know this sounds strange, with one car in P14 and the other unable to set a time, but our pure pace was the best it has been on a Saturday this season. Kimi, running on used tyres, was less than a second from provisional pole at the end of Q2 and little more than 0.02 from Ricciardo, on fresh rubber. He was on a good lap and would have had a tow on the final straight, so we are confident he would have been there or thereabout for the top ten. Antonio was unlucky to end his session so early after being in good form during yesterday’s sessions, but we can be confident in our pace for tomorrow. If today’s anything to go by, anything can happen tomorrow and we can fight for a good result.”

“We did a good laptime even though we only had used tyres left after all the red flags in Q1, and we could have got even more without the red flag at the end of Q2. We were on a good lap and we would have had a tow, and I think we could have gone through to Q3. It’s been a difficult qualifying with all the stoppages, but let’s see what we can do: we seemed to be faster and faster with every lap, the car felt better than at any other point in the weekend so it feels we are going in the right direction. Of course there are still things we need to improve but the feeling in qualifying is getting better. Tomorrow anything can happen: we need to stay out of any issue at the start and see what we can get out of this race.”

“It’s disappointing to do a mistake like this when we looked strong. I locked up in the middle of the corner and, when that happens in a turn like that, it’s very difficult to recover: I apologise to the team as we had it in us to do a good result today. At least, this is not Monaco and we can still recover and have a good race, especially if our pace is like today’s. We had the speed to get in Q2 and possibly even Q3, so we will not give up: everything is possible here in Baku and we’ll be ready to take the opportunity.”