A record-breaking season. Bearman, Bedrin and Van Amersfoort triumph in Formula 4 powered by Abarth in Italy and Germany, with only one winner in two championships for the first time in history

Oliver Bearman is the first driver in the history of the F4 championships in Italy and Germany to win both titles in the same season. 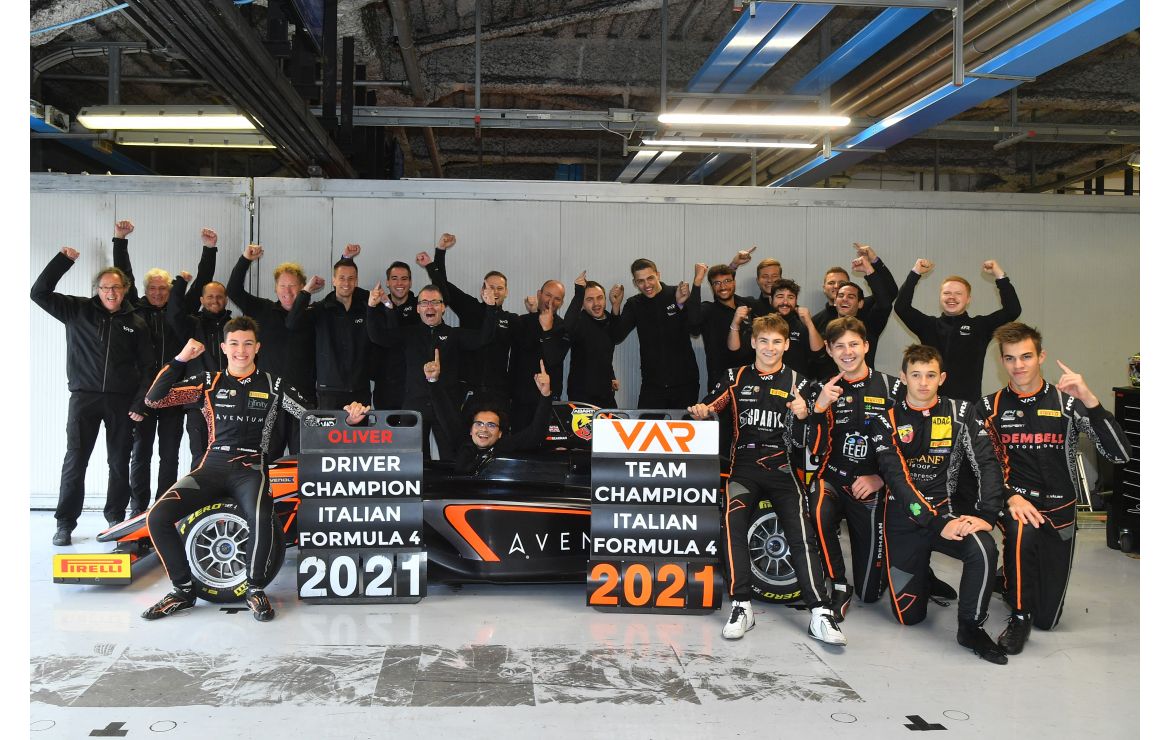 Formula 4 history has been rewritten. Oliver Bearman, Nikita Bedrin and the Van Amersfoort Racing team have won everything there was to win in 2021 at the Italian F.4 Championship powered by Abarth certified by FIA and the ADAC Formel 4 powered by Abarth certified by FIA, the two longest-standing and most representative series in the preparatory categories launched in 2014 by the International Automobile Federation (FIA).

The results of the Van Amersfoort Racing team and its drivers Oliver Bearman and Nikita Bedrin are a source of pride and satisfaction for Abarth, which congratulates them on the major successes they have achieved. Abarth's commitment to Formula 4 is linked to the brand’s history and the philosophy of its founder Carlo Abarth, who always promoted performance accessible to all, supporting young talents in order to ferry them toward a future in motorsport, with performance at the highest level. The results of Van Amersfoort, Bearman and Bedrin, in the name of this philosophy, add a significant record to Abarth’s history.

Bearman, a 16-year-old Briton driving for the Van Amersfoort Racing team, ended his season with 17 wins, 6 second places and 3 third places, between Italy and Germany. The performance of the young driver from Essex has not gone unnoticed, with his successes and ability landing him the position of new driver at the Prancing Horse’s Ferrari Driver Academy. “It's been a fantastic season”, said Bearman. "It's wonderful to have become the first driver to win both championships. My team has done an amazing job and much of the credit for this success goes to them. There have been several difficult times over the year, but the important thing is to know how to rise up from defeat. Joining the FDA is an incredible opportunity and I can't wait to get started. It’s great that the results I achieved this season have been acknowledged, even though it was a real surprise for me, but obviously one of those surprises I've always wanted to have”. Bearman also wanted to give advice to young drivers facing Formula 4 for the first time: "The only thing I can say is to listen to your engineers. They’ll always do the best they can for you and will always be there at your side to help you go faster. The other piece of advice, maybe the biggest one: have fun! Formula 4 is a training category at the highest level, which has started the careers of many young talents. A professional approach is needed to experience it at its best, but never give up on enjoying yourself on track in a car with top performance on the international scene that prepares you for a future as a driver”.

As well as Bearman, the 15-year-old Russian Nikita Bedrin was the Van Amersfoort Racing team’s other success story, with 3 overall victories and 6 podiums in his first Formula 4 season. Among the rookies, Bedrin took 17 victories between Italy and Germany, accompanied by 6 second places and 2 thirds. "It hasn't been an easy season for me”, noted Bedrin. “I was unlucky several times, meaning I couldn't finish some of the races, but I always tried to improve every time I went on the track. I think a lot of work has been done since the beginning of this year. Coming from karting, once you get into the cockpit of a Formula 4 car, you feel the speed and difficulty of driving a real single-seater. It definitely isn't easy, the aerodynamics not being great, driving cleanly and not making any mistakes. But the team did a great job, always making the car easy to drive. In a category like Formula 4, you have to learn as fast as possible because there’s no time to lose. Of course, my dream is to reach Formula 1, but the next few years will be fundamental in getting to the top. I think I have good potential, but we'll see”. In his first year in the preparatory series that has launched several drivers who are now permanent fixtures in Formula 1 – such as Lance Stroll, Lando Norris and Mick Schumacher, the Russian driver was immediately among the best interpreters in the category, reaching the overall top 5 several times alongside more experienced drivers.

The two young drivers’ successes share a common denominator: the Van Amersfoort Racing team. The Dutch team – founded by Frits van Amersfoort and directed by Rob Niessink – dominated, with its drivers in both the Italian and German series obtaining a historic double. In the 39 races held during the season, the black and orange team had at least one of its drivers on the podium at 35 of them. They also completed a hat-trick in the Italian series, with Bearman ahead of Bedrin and Joshua Dufek at Imola, and another in the German series at their home race at Zandvoort, where Britain's Bearman came in ahead of Switzerland’s Dufek and Russia’s Bedrin. Van Amersfoort Racing CEO Rob Niessink took stock of the season and the first generation of Formula 4: “Of course, the 2021 Formula 4 season was very positive for us. Having won all 6 titles on offer in the Italian and German Championships is a moment to be remembered in the history of VAR. Given that this year is the last one for the F4-T014 in both championships, these successes are even more memorable. We were there at the inaugural race weekend in Germany in 2015, where we climbed to the top step of the podium with Mick Schumacher, and now we've been there at its last race, doing the same with Nikita Bedrin. It’s been an extraordinary adventure and the list of drivers who have reached the highest levels of motorsport competing with the Abarth-powered Tatuus F4-T014 is long and impressive. It shows that this car has played a vital role in building racing careers around the world. We’ve got to know the car very well over the years and have made great memories and successes with drivers like Mick Schumacher, Joey Mawson, Frederik Vesti, Dennis Hauger, Liam Lawson, Jonny Edgar, Jak Crawford, Joshua Dufek, Nikita Bedrin, Oliver Bearman and many more!”.