Alfa Romeo Racing ORLEN finished the inaugural Qatar Grand Prix in 14th and 15th positions, a result achieved in difficult conditions during the floodlit race. Kimi Räikkönen and Antonio Giovinazzi delivered solid performances from the back, executing two really good starts and achieving the most that was possible on the night. 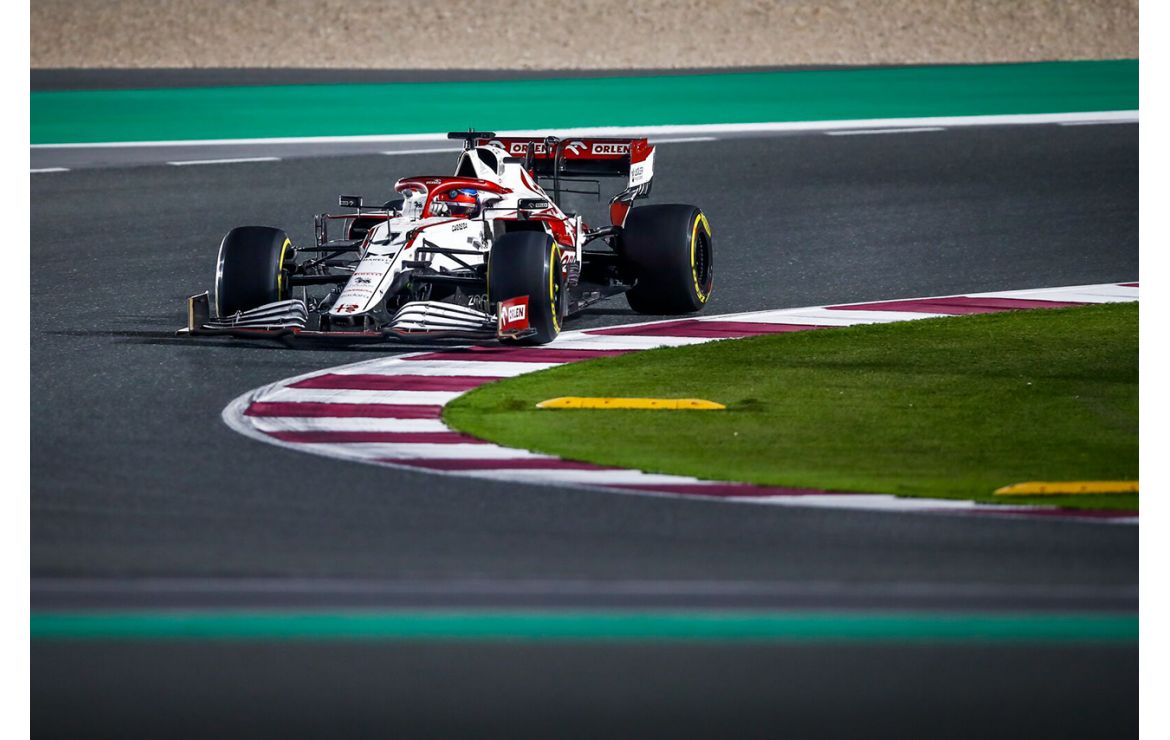 Alfa Romeo Racing ORLEN finished the inaugural Qatar Grand Prix in 14th and 15th positions, a result achieved in difficult conditions during the floodlit race. Kimi Räikkönen and Antonio Giovinazzi delivered solid performances from the back, executing two really good starts and achieving the most that was possible on the night.

At the end of the first lap, the 16th and 18th places the team held on the grid had turned to 12th and 14th, as the team battled the Ferrari of Leclerc. Kimi and Antonio committed to a two-stop strategy, a choice that would save the team from the spate of punctures that befell some of our rivals as they battled degradation and hard kerbs. This set them up for a comeback drive in which they dispatched the two Haas and the two Williams – particularly of note was Kimi’s decisive move on Latifi around the outside of turn one, the two cars coming ever so close to contact.

By the flag, Kimi and Antonio were closing in on the rivals ahead, coming within sight of the McLaren of Ricciardo and Tsunoda’s AlphaTauri on the final lap and crossing the line just three seconds behind their opponents.

The race brings this triple-header to an end, a set of races that tested the team: it’s back to Hinwil now, to prepare the final outings of the season in Saudi Arabia, another new track on the calendar, and Abu Dhabi.


Frédéric Vasseur, Team Principal Alfa Romeo Racing ORLEN: “We had a better Sunday after a difficult weekend, on a track that has been quite tough for our cars. Our pace through practice, qualifying and the race was affected by some damage we picked up during the sessions, so to pull together a good recovery drive like tonight’s, leaving behind the Haas and the Williams, was a positive. Both drivers did really well at the start, produced some good overtakes and in the end we were able to close to within three seconds of Ricciardo and Tsunoda. P14 and P15 was the most we could achieve today and we did it. Now we have a week to regroup after this triple-header, time to prepare for the final two races of the season.”

“I was surprised by the overtakes we could do, in the end it was an entertaining race. I didn’t expect much at the beginning, perhaps to be able to race with some people as the car was pretty much the same as yesterday, but we had a good start and then things kept improving as the race went on. I had some good battles and by the end we were catching the McLaren and AlphaTauri ahead. I think we got everything we could out of this race.”

“We did the maximum we could, I don’t think anything more than P15 was possible today. We had a great first lap, gaining four places, and then we were in some nice battles for the rest of the evening. We struggled yesterday, but we knew with a good race we could finish ahead of both Haas and Williams – and that is what we delivered. We went for a two-stopper as we knew the degradation was high and the kerbs were hard, and at the end we were quicker than our rivals. Given where we started, we have to be satisfied with our race today.”